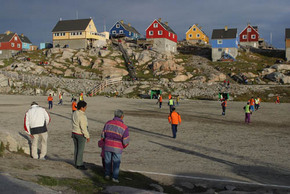 Greenland is not as green as its name suggests; in fact, it is only the ice-free coastal regions that are green and the inner regions are all covered under an extended ice-sheet. Even the surrounding waters are most often frozen. Continuing in the same vein it must be admitted that ‘ice’ is certainly an attraction of Greenland tourism but it is not certainly the sole attraction. Greenland presents stunning scenery with its many fjords, glaciers, icebergs, mountains and islands. To add to your pleasures, there are lures in the form of the spectacular Aurora Borealis (or the Northern Lights) phenomenon and activities like cross-country skiing, whale-watching and sea-kayaking.

It is advisable that you tour Greenland as part of conducted-tours instead of touring on your own. Tour-conductors usually arrange tours that involve exploring Greenland partly on foot, partly on dog-sledges as well as helicopters and cruises.

Speaking of industries, Greenland’s key industries have been primarily involved in fish-processing but recent break-through discoveries of Greenland’s mineral-wealth have led to the development of a budding mining sector.

Greenland tourism, supported by its sound transport infrastructure, has made significant contributions to Greenland’s economy by itself supporting peripheral/specialized industries like fur-productions, handicrafts, etc.

Greenland’s culture carries forward the Inuit culture because most of the Greenlanders claim descent from the Inuit-people. Hunting is an integral part of Greenland culture; like the Inuits, the Greenlanders engage in hunting not only to showcase their skill and power, but also make it a means of sustenance. Among the other Inuit traditions being followed are ice-fishing and dog-sledges; of course, for a change these now form the attractions of Greenland tourism.

Going out during the night while you are in Nuuk may not be too typical especially because the entire place turns out to be cooler than in the day.  Despite this, however, you still have options for which you could spend the night.  There are bars and clubs and there are also restaurants that could give you an evening of fun and relaxation....  Read more »

Being part of a very cold country, Nuuk’s primary travel destinations come from dog sledding and skiing spots.  Other things you could enjoy while in this city are swimming and looking at the houses around the area.  The abodes come in different colors which you will truly appreciate and it beholds a lot of plants in the respective owner’s backyards....  Read more »

Nuuk is the capital and the second largest city of Greenland.  Strategically located at around 150 miles from the Arctic Circle, this place is famous for whale-watching endeavors.  Taking a trip to this city should be supported by detailed information pertinent to making the tour worthwhile....  Read more »