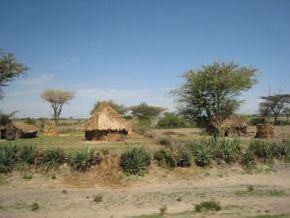 When we say Ethiopia we think at a land of contrasts and extremes, a tourist paradise in which all the ancient historical traditions are still preserved, an open stage of sacred rituals, as well as a land of discovery that fascinates every one of us by offering the most picturesque landscapes, varying from the highest Simien Mountains to the lowest Danakil Depression. Known as home of humankind, Ethiopia is one of the oldest countries in the entire world, where Adam and Eve lived. No wonder its culture and traditions date back thousands of years making this country a land of mystery and fascination.

The main goal of this Ethiopia Travel Guide is to lead you to a mystical land of remote and wild places, where the most wonderful landscapes join together with the authentic world of the Old Testament so as to make you adhere willingly to its archaic faith.

Ethiopia is known as a landlocked country with most of its landmass located in the Horn of Africa peninsula, in the eastern part of the African continent. The capital city is Addis Ababa.

The Ethiopian relief consists of the rugged mountain regions of the Simien Mountains, with the highest top being Ras Dashen, 4,620 m, divided by the Great Rift Valley, with splendid escarpments, volcanic lakes, wide savannah, and semi-desert. One of the most impressive natural spectacles in the continent of Africa are the magnificent Tissisat Falls on the Blue Nile River, in the north-western Ethiopian Plateau, not far away from Lake T’ana.

The climate in Ethiopia varies according to its altitudes. Thus, the climate is characterized as being hot and humid in lowlands, warm in the hilly regions and much cooler in the highlands. The dry season lasts from October to May when it is also the best time to visit Ethiopia, as the rainy season abounds in rainfalls. The average temperature is around 20 degrees Celsius, which is considered to be moderated and favorable for travelling.

The multitude of natural beauties Ethiopia has been blessed with consists of the most stunning landscapes you could imagine. The contrast between the high tops of Ethiopian mountains and the deepest valleys on earth, adding the white-water rivers and their gigantic waterfalls, as well as the large savannah and the lush jungle, makes the country of Ethiopia become one of the most adventurous destinations of any traveler seeking the essence of wildlife.

Lots of Ethiopian national parks and reservations offer the opportunity of exploring the natural treasures and the widest range of wildlife, well conserved in its natural habitats. Awash National Park is dominated by Fantalle Volcano, 1,800 m, and some other splendid volcanic formations and offers the most diversified wildlife reserve in the country of Ethiopia.

Bale Mountains National Park offers a large network of high altitude paths for both horseback riding and foot trekking to wander through its virgin woods and extensive moorlands, with lively mountain streams rich in brown trout. It is also the natural habitat of the Simien red fox and the mountain nyala living nowhere else in such a great number.

Gambela National Park, represents the real Ethiopian tropical area, providing all the elements of the African safari. A varied range of animals such as buffalos, giraffes, antelopes, zebras, tiangs, warthogs, lions, elephants, hippos and many other, animate the mainland of this marvelous reservation.

Omo National Park, a vast expanse of wildlife sanctuary along the Omo River, provides the most exciting location for white-water rafters as during the rainy season rafting can be properly done by all those keen on extreme sports. In its running towards Lake Turkana in lowlands, the river passes under the canopy alongside its banks which is populated by thousands of colorful birds to make the scenery.

Simien Mountains National Park shows its spectacular splendor with fabulous escarpments, compared to the Grand Canyon in the USA. As part of the World Heritage Site, conferred by UNESCO, the Simien Mountains offer the most picturesque landscapes where the most diversified endemic fauna live.

The unit of currency in Ethiopia is birr, denoted by ETB. 1 birr is divided into 100 cents. The birr can be available in both coins and notes.

This Ethiopia Travel Guide sketchily refers to Ethiopia as the genuine discovery of beautiful landscapes. Ethiopia offers a true safari experience for any of you willing to make a real discovery of the eastern African continent.

The city of Arba Mintch is located in the southern region of Ethiopia. It is not one of the most famous cities of Ethiopia but it attracts some tourists due to the presence of some historical tourist sites in and around this city. It is also famous by the name of Minghi and Gantar. In this Arba Mintch Travel Guide, we will present some important facts.  Read more »

Location: Dembidollo is a beautiful market town situated on the south western part of Ethiopia. Dembidollo is located in the famous Mirab Welega zone in the Oromia Region. This market town is at an altitude of about 1701 to 1827 m above the sea level. Dembidollo was formerly known as Sayo and a semi-autonomous kingdom had ruled the town till the end of the 19th century....  Read more »

Addis Abeba, Ethiopia is often spelled Addis Abeba, and is the largest city in Ethiopia, as well as its capital.  It has a unique status of begin both a state and a city.  It is called the African capital, due to its diplomatic, political, and historical significance for the rest of the continent.  There are over 80 nationalities in this city, and each speaks its own language....  Read more »