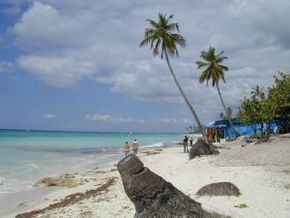 This is the place where Christopher Columbus reached land on the 5th of December 1492. The ruins of the oldest cathedral in the Americas are still standing under the protection of UNESCO World Heritage. Speaking of religion, the inhabitants are largely Roman Catholic, along minorities of with Protestants, Buddhists, Muslims or Dominican Vudu believers. The religious spirit could not prevent the country from becoming a transition place for drugs on their way to Europe or North America, nor was it a shield against prostitution, including children traded for sex. The economy does not consist only of the underground part, it also comprises agriculture, mining, (eco) tourism and real estate sector with holiday purposes. New construction projects like Cap Cana, San Souci offered a chance for employment for many people. The economic situation of the country is stable now and so is the currency, the Dominican peso.

There are a few things automatically associated with South America, but some are specific to this country or enriched with original elements. Latin rhythms like tumba, bachata or meringue have their roots the Dominican Republic. The carnival is probably the best event to enjoy this music. All the culture has been influenced by the Africans, as many descendents of slaves live here. Rhum and tobacco are among the main products of this country. About half of tobacco total manufacturing is done in a place named Villa Gonzales. If we speak about sports, as in US, baseball and basketball are the favorites.

The climate means sunny weather all year round. Thus, even the capital of Santo Domingo can offer splendid nights, on the famous street of Malecon or on any street animated by Merengue. There are even Las Vegas style casinos. The hotels offer many facilities: sports (scuba diving, golf or whatever you wish), clubs for children, spa-s, beach services. The second largest city is Santiago de los Caballeros, but you may choose other great destinations, not so crowded, such as: La Romana, Punta Cana, Puerto Plata, Cabarete.

International cuisine is available, but it would be a pity not to taste the local flavors, some being also very healthy. For instance, quipes or tipili is a specialty consisting of whole wheat; sofrito is a mixture of herbs and spices associated with many dishes. La Bandera (the flag) is the local lunch consisting of meat, red beans and rice. As a dessert, try the very sweet dulce de leche, popular all over South America, cana (sugar cane), arroz con dulce or con leche. The local vegetables are yucca, batata, platanos maduros.

Whenever traveling to a tropical country, take a mosquito repellant with you. There are cases of malaria and Dengue fever reported. The AIDS rate is also high in the Dominican Republic. Although there are problems for water and sanitation in tourist areas, it is better to avoid drinking from the tap. You may use bottled water even for washing your teeth.

Things about Dominican Republic you may be interested in

Are you planning to spend your vacations with family and friends? Santiago can be the best travel destination to have a total blast. It is basically a province in the Dominican Republic that is rich in education and culture. This place is also well known for being a primary industrial hub of textile, cigar, cigarette and rum industries. ...  Read more »

La Romana is a major tourist attraction in the Dominican Republic. The city is considered as one of the luxurious and most complete tourist resort communities in the entire Caribbean. The night life offered by La Romana is somewhat subdued, compared to the high voltage entertainment provided by places like Las Vegas or Paris....  Read more »

La Romana is the third biggest city in the Dominican Republic. The city is the capital of the La Romana province in the southeastern part of the country. The city is situated opposite the Catalina Island. The city was named Romana after the balance that was used by the early settlers to weigh export merchandise.  La Romana History  The history of La Romana is intertwined with sugar....  Read more »

Sosua, located at 24km (15 miles) east of Puerto Plata, has one of the nicest beaches in the country. Sosua beach is an 8km (1/2 mile) wide strip of land surrounded by turquoise waters and coral cliffs. Sosua beach divides the town in two parts, Los Charamicos, and El Batey. The last part is the most popular among tourists and has the most amenities....  Read more »