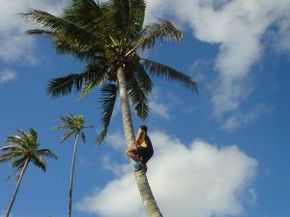 The Cook Islands are a group of 15 islands spread over 2 million square kilometers across the Pacific Ocean. The islands are situated east of the Samoas and west of Tahiti and the islands of French Polynesia. The islands have remained untouched by large scale commercial development and are home to a vibrant culture and the finest hospitality. Rarotonga is one of the main islands and home to the country’s capital, Avarua. The island is part of the nine islands that make up the Southern Islands group. The region is rich in flora and fauna, making it the perfect location for diving and snorkeling. The region is volcanic and is covered by thick rain forests. The other islands include Penrhyn, Pukapuka, Nassau, Palmerston to name a few. The islands are a safe place for visitors who are always greeted by a warm and friendly local people.

The country’s capital, Avarua, houses the Takamoa Mission House, which is the second-oldest building in the South Pacific, built in 1942. A trip to Taputapuatea, in Avarua, will take you to the old Palace of Makea. Further along the west coast is the Tinomana Palace, a splendid two storey coral and lime structure that was built by the British and named Au Maru, meaning ‘ The Peace Brought by Christianity’. On the outskirts of the capital is one of the island’s sacred sites, Arai-Te-Tonga, which used to be the royal court. There are several marked trails that include the Cross Island Trek, Pa’s Mountain Walk and Ikurangi Trek for the experienced rock climber.

· Aitutaki: This beautiful island is a snorkeler’s paradise. The lagoon is home to some of the most colorful species of fish in the world. This is the ideal place for a romantic holiday.

· Aitu: Also known as Enaumanu, this island has over 28 uninhabited beaches. The area is home to a number of rare birds, numerous caves and fossil coral reefs. A trip to the Anataketake cave will give you the chance to spot the Kopeka or Atiu Swiftlet, a small bird that is native to these caves. Fishing and diving are also popular actives on the island. The island is also lined with coffee plantations that are famous for the organic Atiu coffee.

Since the country is comparatively isolated from foreign markets, the economy is slow-paced. Agriculture contributes more than 15% of GDP, with copra and citrus fruits being the major exports. The government has made considerable efforts to encourage tourism, offshore banking, with a particular emphasis on mining and fishing industries in order to stimulate growth and attract investments in the economy. Tourism forms a large chunk of the economy with a massive contribution of 75% towards GDP. 56% of a 6,000 strong labor force are employed in the services industry while 29% are involved in agriculture. Copra, fish, papayas, and citrus fruits are the main exports that account for over $5.3 million in revenue. Imports of foodstuffs, textiles, and capital goods stand at around $81.04 million.

The Cook Islands are known for the tradition of song and dance. Some of the finest singers and dancers from Polynesia are Cook Islanders. Stories are expressed through dance, which is normally at a fast and frenzied pace. The northern islands were inhabited by migrants from Samoa and Tonga, while the southern islands were influenced settlers from Society Islands and the Marquesas. The islanders are closely linked to the Maoris of New Zealand and the Kanaka Maoli of Hawaii.

Things about Cook Islands you may be interested in

A
A
Avarua
guides

Avarua is a town far away from Papeete, which has about 5500 citizens, and it is the administrative capital of the Cook Islands. It is situated on Rarotonga Island, with the town`s main income obtained from tourism, and the official languages being English and Cook Islands Maori....  Read more »