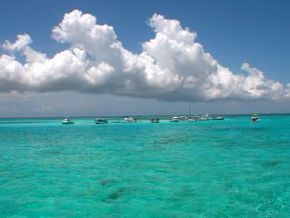 The three tiny Cayman Islands are British Overseas territories, although they may be a bit far off mother England. The three islands, Grand Cayman, Cayman Brac and Little Cayman are scattered in the blue waters of the Caribbean Sea, just south of Cuba. The islands are quite popular tourist destinations, especially for Britts longing to escape the cloudy skies of their homelands, and North-Americans in search of exotic locations. Compared to other Caribbean countries, and even the rest of the globe, Cayman Islands are very well-off. You can find upscale seafood restaurants, five star hotels and exquisite beaches, as well as bohemian beach huts, fast-food stands that serve delicious local specialties and generally cheap fun. Divers love the Caymans for their crystal clear waters and their breathtaking coral reefs. This Cayman Islands Travel Guide offers a brief description of this amazing holiday destination.

As befitting their exotic island fame, the climate of the Caymans is tropical. If you happen to visit the islands in summer, expect some rainy but not excessively hot summers. Winter are dry and cool, and if you’re interested more in sightseeing than beach-going it’s better to you plan your holiday for the winter months. If you are bothered by tropical cyclones, you should keep in mind that July through November is hurricane season. The landscape of the islands is low and smooth, the highest peak in all three islands is at an elevation of 43 meters. The islands are surrounded by rich coral reefs that offer some great scuba diving opportunities. Grand Cayman is the largest and most populous island of the trio and it hosts the capital of the islands, George Town. Other popular destinations in the Caymans are West Bay, Bodden Town and East End.

The Caymans, previously called the Tortugas, were a British colony until 1962 when they became an overseas territory. The British have influenced many aspects of the culture and the most relevant example is the official language of the islands, English. A very important aspect of their culture is religion. Most of the inhabitants are Christians, and on Sunday shops are closed and transport may be limited.

This Cayman Islands Travel Guide recommends that you try some of the islands’ traditional cuisine. Seafood is widespread and very affordable, and you can find some local specialties such as conch and turtle. The cuisine of the Caymans resembles somewhat the cuisine of Jamaica, in that it uses coconut, yams, cassava and rice. There are numerous restaurants on the islands where you can find both local dishes and international ones.

Things about Cayman Islands you may be interested in

The Cayman Islands are the first thing that comes to mind when one thinks of tropical islands, clear skies, blue sea and palm trees on a white sandy beach. Although in the past the Cayman Islands were associated with piracy and looting, nowadays they are an exotic paradise that draw millions of tourists every year....  Read more »

One of the hottest tourist destinations in the Caribbean in recent years, Grand Cayman is a hot spot for divers and a spot of tranquility for pensioners. It is the largest of the Cayman Islands -a British Crown colony-, and almost all of the 32,000 population live here. Tourists should be aware of the characteristics of the climate when visiting Grand Cayman....  Read more »

Do you like diving? How about snorkeling? Fishing? Bird-watching? You may do all of these in the tiny Caribbean island named Little Cayman. Discovered by Christopher Columbus in 1503 and almost unknown until the beginning of the 90s, Little Cayman is a tiny paradise, a perfect destination for contemporary explorers, naturalists, fishermen and, of course, holiday-makers. ...  Read more »

An ideal place for family holiday-makers, diving amateurs and nature lovers, Cayman Brac is a tropical welcoming place. Due to its rainy season which lasts from the end of July through late October, Cayman Brac is preferred mainly during the winter time in Northern Hemisphere by the people who run away from cold and want to enjoy tropical weather, sandy beaches and snorkeling in sea water. ...  Read more »