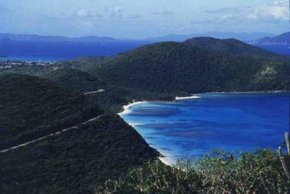 The British Virgin Islands are a British autonomous territory, situated in the Caribbean Sea, in the eastern proximity of US Virgin Islands. The total area of the BVI is of 153 square kilometers; the territory comprises 16 inhabited islands and 20 unpopulated ones, including the Anegada, a coral Island.

The population of the British Virgin Islands is of approximately 22.000, 18.000 living in the largest Island of the territory, Tortola. On the same isle we find the capital city of the BVI, Road Town. Expect good weather when visiting this region, due to its subtropical climate, and to the winds in this region that moderate the temperature. Ethnically, over 83 % of the population is Western African, and only 7% British and Portuguese. Minorities include multiracial and East Indian. In the next paragraphs of the travel guide other aspects concerning the British Virgin Islands will be discussed.

The cuisine in the BVI displays a unique use of flavors. Of course, because the territory is surrounded by water, fish and seafood are the basic ingredients in local dishes. A popular dish is the Fungi, which is made from cornmeal and consumed with different varieties of fish. An additional dish, which is highly appreciated, is the Roti, a dish imported from India, made from curried vegetables and beef or chicken.

People consume a lot of tropical fruits, which are also used to create delicious non-alcoholic cocktails. Also, tea is very popular in this region, as it is in the motherland. Regarding pastries and cakes, pate and Johnny cake are the most well-known.

It’s a must-mention in this British Virgin Islands travel guide the fact that the BVI are worldwide recognized for the clear sailing waters that surrounds them. That is why sailing is a highly recommended activity when in this territory. You can choose from renting your own boat, if you have gained some experience in navigation, or sail around with a captain and discover the remote beaches and wonderful landscapes. Also, diving is a unique experience; you have the opportunity to encounter closely the marine life existent in the Caribbean. Take a dive and spot the coral gardens situated in the vicinity of the Caves and Norman islands, and also notice the squirrel fishes, butterfly fishes, turtles and other marine creatures in the waters of the other islands of the region.

Water sports are also a popular option, especially surfing and waterskiing. Also, if you are a passionate fisherman, there are various fisherman`s contests being held in the isles. If you just want to enjoy the wonderful sights that the BVI has to offer, visiting the national parks is a must-do. This way, you will encounter a shipwreck, the tropical forest and the miracle of Caribbean wildlife.

BVI’s economy is one of the strongest and most blooming from the ones existing in the Caribbean. Unusual is the fact that the US dollar is the national currency. The majority of British Virgin Islanders are working in the services sector, followed by the industrial one. As expected, tourism lies at the base of the national economy, together with the financial services sector. The agricultural zone is poorly developed, mainly because the soil is poor in nutritive substances, causing massive imports of food mainly from Puerto Rico, US Virgin Islands and USA.

Things about British Virgin Islands you may be interested in

After Tortola, Virgin Gorda is the second in the British Virgin Islands, situated at 41km (26 miles) east of St. Thomas and at19km (12 miles) of Tortola. The island has a length of 16km.There is a difference between the north and the south of Virgin Gorda. The southern coast presents large boulders that incorporate in the flatness of the landscape....  Read more »

If you’re looking for a place where you can embrace the beauty and silence of untouched nature, you’ve found it. Peter Islands Resort is a quite, private island where every single person can find himself/herself and enjoy unforgettable moments with the loved ones....  Read more »

Peter Island is one of the 60 islands that make up the British Virgin Islands and it is one of the most representative, its beauty and paradise like charm attracting visitors from all over the world. Peter Island is the fifth largest island from the British Virgin Island group covering 1,800-acre just four miles south of Tortola. it has more than 20 secluded coves and five dream beaches....  Read more »

If you are interested in ninety-nine per cent exotic wild life and natural wonders and only little signs of civilization, the island called Anegada is a good option. ...  Read more »