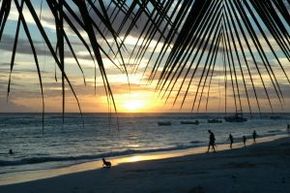 With its pink- and white-sand beaches and spectacular landscapes, Barbados is one of the most attractive islands of the Caribbean. But it offers more than just beach life, it’s a paradise for those who are interested in West Indian culture, and has more sightseeing attractions than most Caribbean islands.

While the south coast is known for its nightlife, and the west coast is completely built up, there are some undeveloped places on the island, offering tranquility for those who seek to get away from the rush and clamor of the everyday for a while. The Atlantic coast is the perfect place for the escapists.

The beaches of Barbados are all open to the public! The most popular are those on the West Coast, the waters being calm here. The often crowded, but beautiful Payness Bay, excellent for water sports - especially snorkeling, Brighton Beach, Brandon’s Beach, Paradise Beach and Mullins Beach with its glassy-blue waters are among the best beaches of the West “Gold” Coast.

Casuarina Beach, cooled by trade winds and being very popular with windsurfers, Silver Sands Beach, with its white-sand beach, being a favorite with many Bejans, and the family favorite Sandy Beach are the major beaches of the East Coast.

The Southeast Coast is known for its big waves, especially at Crane Beach, a beautiful resort and a good choice for bodysurfing, but where one has to be aware of the often too rough waters! Bottom Bay is the all-time favorite. Brilliantly white sand, aquamarine sea, tropical beach with coconut palms… it is a real dreamlike place to visit.

On the rougher East (Atlantic) Coast there are miles and miles of uncrowded beaches, very ideal for long walks. But the extremely high waves, the often rocky bottom and the unpredictable currents make swimming dangerous! However, it is this ruggedness that makes it special, offers an atmosphere of grandeur and attracts so many people who simply adore the beaches of the Atlantic Coast, especially those in the Bathsheba areas.

Around half a million visitors come to Barbados by cruise ship, so a $6-million cruise-ship terminal was opened with a lot of shops and stores. Besides the handmade souvenirs of Barbados one can buy on the ship, the travelers can learn about the atmosphere of the island, as the interior was specially designed to re-create the feeling of an island life.

Barbados is known as “Little England” in the Caribbean. Many Bajans speak with a British accent, cricket is still the national sport, and some traditions, like the afternoon tea, for instance, remain. East of Trafalgar Square, you can find the St. Michael’s Cathedral, the symbol of the Church of England. Going on, you can’t leave out the Synagogue, which is one of the oldest. At Barbados Museum, you can follow the development of the island from prehistoric to modern times.

Besides these cultural sights, it is warmly recommended to visit the center of the island as the lush interior is the real beauty of the island. A hike, drive or tour through rarely visited parishes is really worth the time.

If you are interested in the elegant colonial lifestyle - once commonplace in Barbados - you can tour a different great house every Wednesday afternoon from mid-January to early April. Furthermore, you can watch cricket matches, horse races, and if you need a rest, a nice walk, or a picnic, just visit Farley Hill National Park.

Relaxing on one of the beautiful beaches, sightseeing, getting familiar with West Indian culture, having a glimpse into the colorful life of an island… Barbados is the place where you will feel like in a dream!

No data has been added to this country yet.
guides

Christ Church and St. Michael are the chief centers of Barbados’ nightlife but Bridgetown nightlife is quite active and if we say in jest, it is livelier, more promising than the nightlife of other nearby cities like Canaima (Venezuela) or Vieques (Puerto Rico)....  Read more »

The city of Bridgetown was established in 1628, when a group of British sailors led by the Earl of Carlisle set up a community by the Constitution River. However, the history of Bridgetown region can be traced back to around 350 B.C. when the first wave of nomadic groups arrived in the island; the people belonged to the Saladoid-Barrancoid group. The Arawak people arrived around 900 B.C....  Read more »

Spanning the water-body (the Careenage and Constitution River), the city of Bridgetown, Barbados, has its own beauty. But then, Bridgetown has more to it than its natural beauty....  Read more »