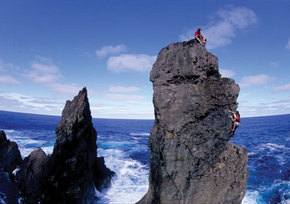 An exotic yet challenging vacation destination, the Pitcairn Islands are a great place to visit for adventurers.

The Pitcairn Islands are a remote group of islands located in the Pacific Ocean, a colonial territory within the British Commonwealth. The group of islands numbers five main islands: Pitcairn which is the only permanently inhabited, Sandy Island, Oeno Island, Henderson Island and Ducie Island. The islands are mainly of volcanic origin except Oeno and Ducie Islands which are atolls.

The main island’s topography is represented by a uniform fertile landmass with the highest point of 347m in Pawala Ridge and a rocky costal region with high cliffs and small sandy beaches on Oeno Island. The local climate is subtropical oceanic with mild and quite uniform temperatures, never exceeding 33ºC and uneven precipitations. Most of the rainfalls are from November to March, a period also characterized by frequent typhoons, quite common here.

Henderson Island is the second island that could be inhabited by a small number of people while the other smaller islands are inhabitable and can be reached only by boat.

Pitcairn Island has a few permanent and intermittent freshwater streams vital for the inhabitants of the islands.

Due to their remoteness and small number of inhabitants, the islands hold an impressive number of plant and animal species; it is the only place in the world where some bird and plant species are still present. There are no protected areas here but due to their isolated location they are the perfect place for the natural development of the local ecosystem. The islands are a favorite breeding place for some bird species, turtles and their corresponding maritime areas are a place where one can observe whale species and unspoiled wonderful coral reefs.

If you decide for Pitcairn Islands as your holiday destination you must take into account that a visa is required for every foreign citizen. For going there you need a valid passport and enough money to sustain yourself during your stay. For more accurate details you must check with a local embassy or consulate office.

The official language is English and the regional currency is the New Zealand Dollar.

Transport on such tiny and almost uninhabited islands is scarce. There are no airports, heliports or seaports here, the islands being reachable only by boat using the Bounty Bay, a small harbor with shallow waters that can only support small boats. The only port here is Adamstown and is also the only settlement located on the main island of Pitcairn. The inhabitants travel by longboats and further by ferry. On the island there are a few paved roads and all inhabitants own all terrain cars in order to be able to travel on any weather conditions.

There are no resorts on the island but several important tourist attractions. The few tourists that come here can visit the Adamstown Museum, the Down Rope cliff holding ancient petroglyphs, the Gudgeon Cave which is one of the many sea level caves and one of the highest parts of the island offering gorgeous views over the ocean.

Some of the most popular activities here are diving, snorkeling, swimming and yachting. The clear waters of the ocean, the few shipwrecks and the unspoiled coral reefs are just a few reasons for you to go diving here. The islands are also a perfect place for birdwatchers; here one can see species of birds like nowhere else.

As for accommodation you have only two options, to stay in one of the local’s house or if your group is larger then you will be offered the possibility to stay at “The Lodge”, a nice cottage owned by the officials.

The local cuisine is based on local ingredients like fish, seafood, local vegetables and fruits, spices and herbs, chicken meat and other types of food imported from New Zealand or French Polynesia. A much appreciated dish here is the fried nanwi or bluefish, pilhi, a puree of bananas, sweet potato and breadfruit and other exotic types of food.

Pitcairn Islands is not an average vacation destination, but your choice to visit these islands can offer you great satisfactions, can make you forget about your busy and stressful life.

A
A
Adamstown
guides

This Adamstown travel-guide will give you all the essential information you need when travelling on the autonomous territory of the Pitcairn Islands, a British governed state that has a total population of 48. It is made up of four islands out of which the only inhabited one is Pitcairn, and all the inhabitants formally live in the capital, Adamstown....  Read more »

The history of Adamstown coincides with that of the discovery, rediscovery and settlement of the Pitcairn Islands. These processes are believed to have started in the 15th century with the Polynesian populations, but when the Portuguese landed there in 1606 they found no inhabitants on two of the islands....  Read more »