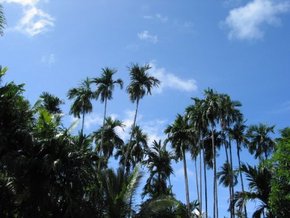 The main target of this Palau Travel Guide is to present one of the world’s most spectacular diving and snorkeling destinations, which is the Palauan archipelago, a wonderful place where tourists spend most of their time underwater to explore an inimitable world and to discover a stunning spectrum of coral reefs and rare marine creatures living in seas. A mystical place lost in the Pacific Ocean, the archipelago of Palau features coral atolls, blue holes, inundated tunnels and hidden caves, a wide range of exploring underwater areas.

On land, the islands of Angaur, Babeldaob, Koror, Peleliu and Rock Islands offer splendid landscapes, rich in a variety of flora and fauna. Some miracles of evolution can be found here, such as Palau Jellyfish Lake, one of the scientific mysteries.

Palau, formally known as the Republic of Palau, is an archipelago nation in Micronesia, 800 km east of the Philippines, consisting of six island groups totaling more than 300 islands. The islands of Palau are part of the Caroline Islands chain in Oceania as well. Its most populous islands are Koror, Babeldaob, Angaur and Peleliu. The new capital city of the Republic of Palau is Melekeok, on the Babeldaob Island, not far from Koror, the largest city in Palau and its former capital city.

The Palauan terrain varies from high mountainous island of Babeldaob to low coral atolls and the large barrier reefs.

The archipelago of Palau is characterized by the hot and humid tropical climate, with a wet season from May to November, when rainfalls are more frequent. The annual average temperature is 28 degrees Celsius. Typhoons are quite rare.

Babeldaob, also named Babelthuap, is the largest island of the Palauan archipelago, covering more than 70 per cent of the total land of the country. Its terrain is mostly mountainous, culminating with its 242 m highest point, Mount Ngerchelchuus. The island is significant for its most extensive natural freshwater lake in all of the Micronesian islands, Lake Ngardok. Its ecosystem makes the habitat for numerous plants, birds, animals, and the endangered saltwater crocodiles named ius, some of which are to be found in the Palauan islands only.

The Babeldaob’s eastern sandy beaches are the best attractions for both locals and tourists. The island is also famous for its beautiful mangrove forests along its western coast. In a word, the island of Babeldaob represents a true paradise on earth.

The island of Babeldaob is linked with Koror Island by the famous Koror - Babeldaob Bridge, long as 413 m, a cable-stayed bridge, built in 2002 so as to replace the former one, which had collapsed.

The main airport in Palau, the Airai Airport, is also located on the island of Babeldaob, as well as the capital city of Melekeok.

Melekeok became the new capital city of the Republic of Palau on 7 October 2006, when the Presidential Office, the National Congress and the Supreme Court were moved into a new complex of impressive buildings resembling classical Greek architecture, right in the middle of the Palauan tropical forest. Surprisingly, there is no security guard at the Presidential Office, which makes people walk freely by and around the building complex at any time.

The State of Malekeok represents one of the greatest attractions for surfers as the ocean offers here its best waves for both surfing and body boarding.

Palauan indigenous cuisine uses cassava, taro, yam, pork and seafood like oysters, Tuna and white fish meats, with the right amount of spices to prepare the most delicious dishes. The taro is the main ingredient for various dishes such as taro leaf au gratin, taro chips and palusami, which is also made of taro roots.

The Palauan cuisine offers the oddest dish served ever such as the fruit bat. As being a small country with a small number of local inhabitants but plenty of foreign tourists, international cuisine is available almost in every of the Palauan restaurants.

The official currency in Palau is the US dollar, USD.

The official language is English and Palauan.

Modern shopping facilities are to be found on the island of Koror, where some various gift shops offer a diversity of handmade local craft items, some of which might look quite unusual.

There are also two private medical clinics and a public hospital to serve both locals and tourists. Health insurance is required as health care is payable.

Koror is the most striking and prominent island of Palau, which is an island nation in the Pacific Ocean. Almost 70% of the population resides in Koror. This is not just an island, but the chief economic centre and capital of Palau as well. The energetic environment and breathtaking sights of this island would stir your soul completely.  Read more »