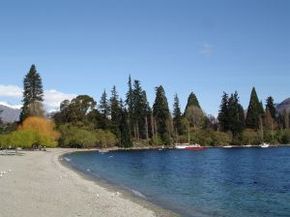 New Zealand is well known for its breathtaking scenic beauty, mild weather and its serene ambiance. Blessed with mild temperatures, moderate rainfall and ample sunshine; it is a haven for travelers in search of peace and relaxation. It is also a well known destination for those who have a tang of adventure. Known as the ‘Adventure Capital of the World’, New Zealand hosts a number of adventure activities such as bungee jumping, skiing, hiking, tandem skydiving, white water rafting, jet boating and many more.

· Auckland: This New Zealand's multi-cultural centre of commerce and industry is also the country’s largest urban area. Volcanic hills, bays, islands and beaches truly make this city a beautiful one. Nicknamed, ‘The City of Sails’, Auckland has the highest boats per capita in the world, as a water body is always just around the corner, making it a haven for tourists who love water and water-sports.

· Wellington: The capital city of New Zealand, and also the administrative, political and cultural hub of the country. A gorgeous and romantic city with hills and mountains covering the city from all sides and ocean sounds and smells always hanging in the air is one of the most visited tourist destinations of the country. Wellington hosts some of the best museums and art galleries in the country. The famous ‘New Zealand International Arts Festival’ hosted here every 2 years which is an international multi-arts festival is a great attraction for the visitors to this tinsel town.

· Queenstown: This is city of breathtaking scenic beauty justified by the snow clad mountains in winter and the orange shimmering lake in summer. This city is very much responsible for New Zealand’s title of ‘Adventure Capital of The World’, and for a good reason! From bungee jumping to skiing, snowboard to paraglide, jet skiing to riding quad-bikes, the list of adventure opportunities available in town is very long.

· Christchurch: Also known as ‘The Garden City’, with public parks and gardens, and the shallow Avon River going through the city, is one of the most attractive cities in New Zealand, and also the largest city in the southern island. This city boasts a rich English history and the largest legacy of gothic architecture in the country. It is a city that embraces celebration with a continuous stream of festivities and events throughout the year.

New Zealand has a modern and a well developed economy. The country has key trading relations with major powers of the world like United States, Japan, China and Australia. Agriculture and tourism are the major pillars that support the economy of the country. The free market policy of the government has supported the economy to flourish better.

With modern infrastructure facilities the country offers a high standard of living to its citizens.

People in New Zealand love to celebrate as they have an unending river of festivals and events running throughout the year. It is home to the world’s largest Polynesian ‘Pasifika’ held in Auckland. It also hosts the ‘New Zealand International Arts Festival’ in Wellington. New Zealand’s rich history can be seen in its heritage of gothic architecture and the colonial styled churches.

Things about New Zealand you may be interested in

Manukau, New Zealand’s third largest city, is located in the northern part of the country, only 5 minutes drive from Auckland. Manukau’s 382 kilometers of coastline offer all types of attractions, from shopping centers to picturesque countryside. State highways 1 and 20 connect Manukau with the rest of the country.  Read more »

Hamilton is a city found in New Zealand. It is a place which offers many fine attractions to both residents and visitors. Tourists are indulged with a broad variety of Hamilton Sights and activities. Hamilton boasts of wonderful attractions just like those found in Auckland Sights.  Read more »

A seaport city found in New Zealand, Napier has a total population of about 57,900. The city is the fifth largest city area in the country. Before the present Napier, the city begun as a small town inhabited by the Maori natives until the Europeans came to the land. Napier History is filled with a series of events every traveler must know about.  Read more »

Manukau is a fresh, animated city found in New Zealand and has something for everyone. Whether the tourists want to explore striking recreational sites or parks, the coastline or just shopping in markets or tasting the city’s cuisine, Manukau Sights has it all. With the many places to visit and friendly inhabitants, Manukau will surely make visitors feel at home.  Read more »

The history of Wellington dates back to the times when the Polynesian explorers started arriving in New Zealand (then referred to as Aotearoa). Kupe is credited with the discovery of Wellington; back in 950 AD, Kupe had anchored close to the southern tip of the present-day Wellington harbor....  Read more »