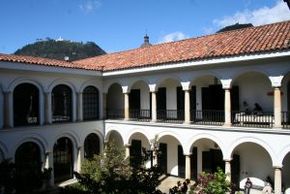 The Republic of Colombia is the forth largest country in South America, with a total surface of 1.2 million square kilometers. It is the only South American nation with coastlines at both Pacific Ocean and Caribbean Sea. Bogota is the capital of Colombia and also its largest city, with over 7 million inhabitants. The climate is tropical, except for the mountainous regions, where the temperatures drop by a few degrees.

The total population of the republic is of almost 44 million; 90 % of whom claim to be Roman-Catholics. The official language is Spanish and the population growth rate is positive (aprox. 1.5 %). In the further section of the travel guide you will be able to read more interesting facts regarding this Latin country.

The Colombian cities display a distinctive allure, a unique cocktail of colonial settlements, modernism and indigenous heritage. First of all, Bogota is an astonishing city, set high in the Andes at the altitude of 2620 meters, and being surrounded by the tropical forest. Its medieval architecture blends with the modern skyscrapers, creating a surreal effect. Santa Marta is another popular historical city, regarding that it was the first Spanish settlement in Colombia. From there you can access two national parks of crucial importance, and meet the natural beauties of this country. San Andres is the perfect place to go if you want a carefree tropical holiday. The crystal clear water and the lovely culture out there will make your experience unforgettable.

The Colombian cuisine blends elements found in European, Indigenous and African regions. The arepa, a bread made of corn, similar to the tortilla) is one of the traditional dishes representing Colombia. The sancocho, a soup made with meat, potatoes, yucca plant and other vegetables is also considered to be a national dish. There is a great variety to Colombian cuisine, because the country has access to so many ingredients, from fruits that are considered exotic to various species of saltwater and freshwater fishes. Also, beans, potatoes, tomatoes and lentils are consumed on a daily basis.

An unusual adventure is waiting for you on the Amazon, inside the rainforest, in the Amacayacu National Park. The investigation is by boat, and you will see various species of animals, from monkeys to dolphins. To see the remains of the Indians that once ruled the land, Ciudad Perdida is one of the places; it is situated in the vicinity of Santa Marta. For diving experiences and the exploration of wildlife, you can visit Isla Gorgona. Don`t miss the chance of seeing whales, monkey, sea turtles and many other animals in their natural habitat.

For unique landscapes, go to the Tayrona National Park. There you have the opportunity to snorkel if you want. Also Los Nevados National Park is another interesting point of interest, with its volcanoes.

We hope that you will have an unforgettable experience in Colombia using our travel guide.

Bogota, the capital of Columbia, is known worldwide for several records. It is the third major city in the world, situated at 2640 m, in the Andean highlands. Bogota is also known under the name of “the Athens of South America”, thanks to its impressive number of libraries and internationally known universities....  Read more »

The territory on which the Columbian massive urban agglomeration stands today was first settled by the Amerindians, and archeological evidence indicates it was first inhabited 10.500 years ago....  Read more »

Cali history starts with the indigenous tribes that inhabited the region, some of which were cannibals, but had well established trade routes with nearby populations....  Read more »

Ibagué is the capital of Colombia’s Tolima department, and one of the country’s major cultural centers. Situated at an altitude of over 1200 kilometers, Ibagué seems to enjoy a perpetual spring season, and it is surrounded by a lush countryside....  Read more »

Florencia is a municipality in Columbia’s Caqueta department holding a population base of 138,500 on the last count, which was done 7 years ago. It has a huge number of livestock. The city was marked by an unfortunate event of insurgency, but presently the things are under control.  Read more »