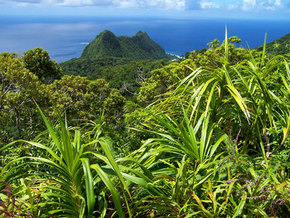 An insular state with rocky and coral sand beaches, high volcanic mountains and luxuriant vegetation, American Samoa will impress you at each step.

The country comprises about seven volcanic and atoll islands, located in the waters of the central Pacific Ocean. The topography of the islands of Tutuila, Aunu’n, Tau, Ofu and Olosega is marked by the high peaks of the extinct volcanoes that initially formed the islands which also play the role of natural barrier against the high winds. Rose Atoll and Swains Atoll have a characteristic topography for any atoll, namely circular islands with a lagoon in the middle.

The largest and most important island is the Tutuila volcanic island, having one of the biggest natural harbors in the Pacific and also the highest peak in the archipelago, the Lata Mountain (964m). All islands have small streams that flow quickly into the ocean or drain into the volcanic soil, the fresh water supplies being thus limited.

The archipelago has a tropical climate with marine influences, two seasons: a dry season and a rainy season and a weather peculiarity, the typhoons that occur every year from December to March.

The archipelago of the American Samoa is a National Park itself. The protected area is trying to preserve the beautiful rainforest, some endangered species of mammals and birds, the corals and also the rich culture of the islanders.

The population is of about only 65.000 people, most of them living in urban areas. Over 90% are native Pacific islanders, are Christian Congregationalists and have Samoan language as their official language.

The capital of the archipelago is Pago Pago, one of the largest villages here and an important port.

If you want to visit American Samoa in your next vacation, you must know that usually a visa and a valid passport are required to enter the country. Some visitors are requested to have return tickets, documents for their next destination if necessary and enough money for their stay. The travelers are also advised to check with a local embassy or consulate office in order to receive the most accurate information.

The regional currency is the US Dollar which can be easily converted in any local bank, hotel or exchange office.

The easiest way to get to American Samoa is by air. The archipelago has one international airport, the Pago Pago International Airport, and several other smaller airports on the neighbor islands. Another option is to travel by ship and use one of the ports that connect the archipelago with the rest of the world. The main port is Pago Pago but there are also several other smaller ports on other islands.

On the islands you can travel by bus or by car using a rent a car company that can also provide bicycles or scoters.

The archipelago is a piece of heaven for anyone looking for a relaxing holiday on a tropical island. Here you can find spectacular volcanic mountains, the deep blue waters of the ocean, lush rainforest and coral sand beaches in one place.

If you decide to visit the capital city, then Sadie’s by the Sea is the perfect spot. The hotel offers good accommodation with self sufficient rooms, private beach right in front of the hotel, a fresh water swimming pool, a great restaurant and a magnificent view over the Rainmaker Mountain. The hotel also offers many opportunities for practicing outdoor activities like snorkeling, kayaking, game fishing and hiking trips.

For a business trip, the Tradewinds Hotel, also located in Pago Pago, offers the best accommodation, with clean rooms, numerous facilities like traditional restaurant, swimming pool, fitness center and conference room, making your stay as comfortable as possible. The hotel is surrounded by luxuriant vegetation, making your vacation even more pleasant.

Things about American Samoa you may be interested in

This Pago Pago travel guide will give you all the basic tourist information necessary when visiting the capital of American Samoa. American Samoa is located in the South Pacific Ocean and is an archipelago consisting of 200 sq kilometers of land, west of the Cook Islands and north of Tonga. Its total population is about 60.000 inhabitants and the official languages are English and Samoan....  Read more »