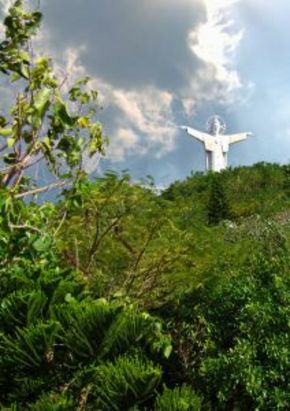 A country bearing the echo of war, be it ancient with the Mongols or modern with the French and the Americans, realm of ancient temples, of wild mountains, of rice fields and of hospitable people, Vietnam is bordered by China, Laos, Cambodia and the South China Sea. The Socialist Republic of Vietnam is a former French colony overrun by the Japanese in 1940. When the Japanese occupation came to an end, the Vietnamese started a battle against the French for their independence and the North of the country had fought the South for 20 years. The USA allied with the South and Cambodia. The war started in 1965 and ended in 1976 when the country was unified under communist rule.

Two thirds of the country’s surface is dominated by the Anam Mountains which stretch between the Red River in the North and Mekong River in the South. Many peaks don’t overtop 2000 m, but the highest peak is in the Northern limit where FanSi Pan reaches up to 3142 m. The Red River’s delta in the North has a surface of approximately 14000 km2, while the Mekong’s in the South covers 37800 square km. A narrow coast plain stretches between the two deltas, along the country. Vietnam has 3200 km of seashore, stretching from the Bay of Thailand to the South China Sea, many beaches still being unexplored.

The climate of the country depends a lot on the location of the areas. As a consequence there’s a humid tropical climate, characterized by monsoons in the North and a warm to hot climate near the sea. Summers are hot and rainy, while winters are cold and relatively dry, in the North. Temperatures are slightly cooler between December and April, which is also the dry season, in the South. Rains begin in May and they are pretty heavy between June and August.

With a millenary history and vibrating of French charm, although affected by modern bureaucracy, Hanoi leaves the impression of the peace and quietness of past times. Its inhabitants still haven’t got used to visitors, but they welcome them full of warmth and curiosity. There are many lakes on the territory of this city, out of which the most important is Hoan Kiem. Don Kinh Nghia Thuc is a Northern district called the “district of the 36 crafts” remembering of the 15th century craftsmen. Hanoi hosts more cultural sites than any city in Vietnam, including 600 pagodas.

The former Saigon is the largest and the richest city in the country, with a population of four million inhabitants, where government’s reformation was firstly experimented. The Dong Khoi Street is its well-known center and it offers everything from art galleries to nightlife. Here, one can visit the War History Museum on Le Duan Boulevard or the War Remnants Museum on Vo van Tan street where one may find massive files regarding the abuses of the American army. The most beautiful pagoda of Saigon is the Thien Hau Temple, with the roof dating since the 19th century, impressible due to its ceramic frescoes.

Located at the river mouth of Han in the South China Sea, port-town Danang wrote history in 1965 when the US army disembarked to start the land offensive against the Vietnamese. Nowadays, the town has numerous parks and gardens. The Cham Museum is the vestige of the mysterious existence of the Cham dynasty. Another famous place that’s worth visiting is the impressive Marble Mount, where the five elements are represented by its five peaks, the highest being 106m. The mountain’s caves have been transformed for religious purposes and Buddha statues are built within them along with all the associated guardians.

On the shore of the Red River, 100 km East from Hanoi stretches the port-town Haiphong, the second as size in the North, with a population of over one million inhabitants. Many buildings remained intact, from the so-called “French era”, among which the old theatre on Dien Bien Phu street.

The outstanding landscape of the Ha Long Bay has been fascinating poets and visitors for centuries. The archipelago reminds of the Thai one, Phanga, near Phuket. The Vietnamese bay occupies a surface ten times bigger than Phanga. Travelers may visit by boat the 3000 islands, each having its shape and legend, with fascinating caves famous for their stalagmites and stalactites.

The official currency is the dong, which is issued only as banknote. People are recommended to wear light cotton clothes and raincoats during the wet season. The footwear should also be comfortable.

No vaccine is compulsory, but it is advisable to be vaccinated against hepatitis, poliomyelitis, typhus and tetanus. Some oral medication might prove useful in order to prevent malaria.

Hanoi history is pretty old, dating back to about 3000 B.C. The discovery of Bronze-made articles as part of archeological excavations in the Red River Delta region corroborates the fact that the region has been inhabited (in phases) since the Bronze Age....  Read more »

Hanoi is not really famous for its nightlife. Having said this, it must be admitted that things have changed a lot since the days of the Vietnam War (when people chose to visit other destinations like Ho Chi Minh City and even Udon Thani in Thailand in order to enjoy nightlife)....  Read more »

Hanoi is a place that offers a perfect blend of age old Asian traditions and contemporary cultures. It is a place where medieval epoch meets the modern ethnicity. Hanoi sights offer something for everyone. There are architectural marvels, historical avenues, stylish restaurants and entertainment arenas....  Read more »

Hanoi is currently the capital of Vietnam and the second largest city in the country after Ho Chi Minh City. It became a metropolitan area in 2008 with an estimated population of more than 6 millions. Hanoi is an exotic mix of medieval houses, French influences and modern architecture, that will provide an intense experience of the Asian lifestyle.  Read more »

Ho Chi Minh City (Saigon) is the largest city and headquarters of Vietnam that has grown to establish itself in the ‘Asian Tiger’ economic slugfest. It is located on the Saigon River and is Vietnam’s major port with a population of over 8 million people. Most of the people in Ho Chi Minh City travel throughout the clogged arteries of the city on about 3 million motorbikes. ...  Read more »