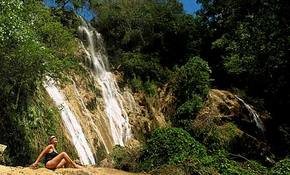 Vanuatu, the archipelago nation in the South Pacific region, is a gem among touristic destinations. It fascinates people with its diverse physical features – there are at least five active volcanoes in Vanuatu (including Lopevi and Yasur) besides its beaches, caves, canyons, reefs, cascading waterfalls, tropical rainforests, mountains and its surrounding waters. All these not only give Vanuatu a picture-perfect setting, they also make it an adventure lover’s paradise promising varied adventure sports like abseiling, diving, hiking, snorkeling, trekking, etc. Vanuatu’s colorful tribal culture and its varied social/sporting events are other attractions of Vanuatu as are its giant banyan trees, the WWII relics and the many shipwrecks in Vanuatu’s waters. Visit Vanuatu for a refreshing experience, it beckons you with its unspoiled charm…

Vanuatu travel also means a visit to Nature-corners like the Tanna Island (famous for the most easily reachable Active Volcano, Mt.Yasur, and wild horses), Pentecost Island, Nguna Island, the Maskelynes, etc. While the islands will captivate you with their spell-bounding beauty and multiple activities, the people will introduce you to ancient cultures and traditions.

Vanuatu is a small country, with very less arable, agricultural land but its economy still relies on the agricultural sector. The agricultural sector (which also includes cattle-farming) employs a major part of the population, about 80% and produces both food-crops as well as cash-crops; while food-crops are consumed domestically, cash-crops like kava, copra, cocoa, beef, etc. are hugely exported (and they bring in about 60% of Vanuatu’s export-earnings). Fishing could have been one of Vanuatu’s chief revenue earners but in the absence of an organized sector, the potential of the fishing industry remains to be tapped.

Vanuatu’s transportation is typical of an archipelago nation – you arrive here either by plane or boat and usually use the same means of transports for traveling to the individual islands. Buses and taxis are available for inland-travel on the islands. The communication infrastructure is quite good – telephone/mobile services are available across the isles and the urban centers even promise internet access.

Vanuatu has a large Melanesian population (more than 98% of the total population) but still Vanuatuan-culture is quite diverse, especially when it comes to the languages (over 100 indigenous languages) spoken in different parts of the archipelago or their customs. Christianity, chiefly Protestantism is followed by the majority of the populace.

Of late, band-music has gained in popularity, but a sizeable part of the inhabitants (mostly inhabiting the rural areas) are still in love with traditional music and many musical instruments, including special drums, bamboo flutes, slit gongs, etc. are back in use.

Vanuatuan cuisine is characteristic of the region – most dishes are boiled or steamed and do not involve a lot of frying. The cuisine, though varied, is entirely dependent on local-produces, which not only include roots and root-vegetables but also a variety of fruits, fishes and coconut-milk.

The archipelago nation of Vanuatu comprises over 80 islands, each with their particular charm, but none rises to the level of Efate, the island that hosts the exotically decadent capital, Port-Vila. Built around the magnificent harbor of Vila Port, the city is a tropical paradise that possesses some of the most amazing beaches in the world....  Read more »