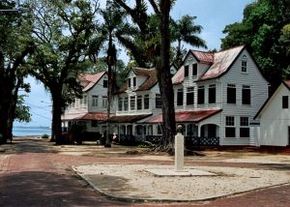 A tiny spot on the map of South America, Suriname neighbors both the Atlantic and the Amazonianrainforest. Suriname is a young nation – once a Dutch colony, Suriname only gained independence fromNetherlands in 1975. While much of its population, cultural manifestations and economic activities areconcentrated around the capital Paramaribo, the southern part of Suriname is a nature lover’s dream,dominated by virgin forests. This Suriname Travel Guide is intended to give you some essential info onthis less known South American country.

Suriname is an equatorial country and a hot climate all year round. Temperatures rarely fall under 20degrees Celsius, however they vary slightly from season to season. Unlike typical tropical climates, theclimate of Suriname is characterized by two dry and two wet seasons.
The terrain of Suriname has an amphitheater display: while the scarcely populated South consists ofsmall mountains and rolling hills covered by rainforest, the north is represented by a low plain, withswampy areas and a big lake in the middle – Brokopondo Reservoir.

Suriname’s economy is mainly based on agriculture and mining. Rice and tropical fruits are cultivated inthe coastal zones, while the higher regions are known for the exploitation of gold and bauxite. Surinamehas one international airport, Johan Adolf Pengel, and a network buses and ferries that connects thecoastal areas.

Unlike most of the South American states, where Spanish and Portuguese influences are the strongest,Suriname represents a mosaic of cultures, using Dutch as the lingua franca. Hindu people fromNorthern India, Africans and Javanese are the main ethnic groups, but overall Suriname is one of themost culturally diverse countries in the world. People travelling in Suriname shouldn’t be surprisedat discovering the various religious institutions as well as several, widely spoken creole and maroonlanguages. Suriname’s diversity is particularly noticeable in terms of cuisine: Javanese and Chineserestaurants with their delicious food represent one of the main attractions in the capital Paramaribo.

Paramaribo is a key attraction in Suriname, especially due to its historic center. Old wooden housesand even a wooden cathedral (St Peter and Paul) are typical and beautiful reminiscences of the colonial
architecture in Suriname and Jan Mayen Islands. Food is also an important reason to visit the multicultural Paramaribo.
The rural areas of the country are particularly charming: you can visit the old plantations with theirinvariably white colonial villas in the middle of endless rice fields, or explore the more remote areas inthe south, with their picturesque Maroon villages.
The greatest attraction in Suriname is by far its nature. The country’s national parks and protected areasaccount for almost 30% of its territory. Natural parks like Brownsberg, Galibi Nature Reserve and CentralSuriname Nature Reserve display an amazing array of species and habitats, from sea turtles and waterbirds along river mouths and swamps to monkeys and deer in the deep rainforests.

Paramaribo, Travel guide – Location The exotic Paramaribo is located on the shores of the Atlantic Ocean, in Northern South America, 163 miles from Cayenne, French Guiana and 174 miles from Georgetown, Guyana. Paramaribo travel guide presents a few basic facts about the city.  Read more »

Albina is situated in Suriname.  It is a small country in South America that has ten  districts. Albina is the capital of the Marowijne District. It is small town on the west bank of Maroni. It borders the country French Guiana. The climate is tropical and to some extent, it is moderate by the trade winds from the Atlantic Ocean....  Read more »