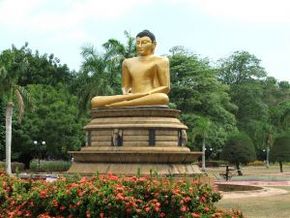 The small pear-shaped island nation of Sri Lanka has everything going for it to be called a great tourist destination – it has physical diversity, stunning landscapes, abundant wildlife, pre-historic/historic sites, rich cultural heritage and every other lure that have been tempting vacationing crowds. The geographical diversity of Sri Lanka that range from pristine golden beaches to coastal features like lagoons and wetlands as well as inner-land features like wildlife-rich forests, mountains, rivers and waterfalls promise you much to see and do. In addition, there is much to explore about the land’s ancient and colonial past.

Much excitement is in store for people interested in fine arts and crafts. In case you decline any of these active pursuits, you can simply visit any of the famous Sri Lankan spas that pledge you rejuvenation through age-old Ayurvedic treatments as well as other eastern/western therapies. End your Sri Lanka tour with some brisk shopping for some Ceylonese gems, trinkets and souvenirs.

Colombo: Colombo is the largest city of Sri Lanka and its commercial capital. The erstwhile capital of Sri Lanka, Colombo is a perfect instance of a vibrant modern city that has well-preserved its Colonial heritage. Colombo’s landmarks include the Fort, Galle Face Green, Kelaniya Raja Maha Vihara, The Viharamahadevi Park, Wolvendaal Church, the Presidential Secretariat, the Town Hall, etc. Colombo city has a number of Hindu temples as well. The National Museum and the Dehiwala Zoo are popular with all age-groups. Other nearby Colombo sights includes Mount Lavinia and Slave Island. You will get everything from cutlery to fashion-stuff, jewelry and even electronics goods at Colombo’s market-place, Pettah.

Anuradhapura: The ancient city of Anuradhapura is a must-visit for its World Heritage Sites. The first capital of Sri Lanka, the city has been the site of a great civilization. Besides being an archeological heaven, Anuradhapura is a sacred city of the Buddhists. City-attractions include Sri Maha Bodhi Tree (the right branch of the Bodhi Tree under which Lord Buddha attained enlightenment planted here by Emperor Ashoka’s daughter Sanghamitta) and Buddhist dagobas like the Jetavana Dagoba. The sacred mountain of Mihintale is also close by.

Kandy: Kandy is the cultural capital of Sri Lanka and a bustling commercial center. Kandy is famous for the cultural carnival, Kandy Perahara, held either in the month of July or August every month for seven consecutive days. Besides, the city has a number of Buddhist as well as Hindu temples and shrines like the Dalda Maligawa (or the Temple of Tooth, named so because a tooth of Lord Buddha is kept here). Kandy’s green-patches like the primeval forest of Udawatte Kele and Peradeniya Gardens attract nature-lovers as well as trekkers as do the nearby mountain ranges.

Sri Lanka has braved a number of natural disasters and continuous civil-war to establish itself as one of the fastest developing economies of the world. The island nation started as an agrarian economy; however, today Sri Lankan economy is dominated by the service sector. Plantation crops like tea, rubber, cinnamon, etc. have long been exported from Sri Lanka to different parts of the world, but now textiles and garments, gems, banking, insurance and telecommunication-services have been added to the list of Sri Lankan exports. With Sri Lanka’s well-developed transport system, strong power sector and telecommunications, the Tourism Industry has done fairly well in terms of its revenue earnings.

Sri Lanka is a multi-cultural country, where people belonging to different ethnic and religious groups co-habit. The largest ethnic group is that of the Sinhalese, who speak in the Sinhala language, follow the Buddhist-faith, Buddhist-customs and traditions. While the Tamils mostly practice Hinduism, the Moors (of the Arab-origin) still embrace Islam and the Burghers (descendants of Dutch and Portuguese settlers) Christianity. The amazing aspect of Sri Lankan multi-culturalism is that here the different cultures still retain their uniqueness.

Things about Sri Lanka you may be interested in

The history of Colombo dates back to over 2000 years as it was very famous amongst different Chinese, Arab, and Roman traders as the city of Colombo had its own natural harbor. This island was called as Kalanpu in 14th century when the famous traveler named lbn Batuta visited it....  Read more »

The city of Colombo happens to be the oldest and the most important city for the country of Sri Lanka. It is most happening city and the expectations of various tourists do rise to the peak whenever they visit this city....  Read more »