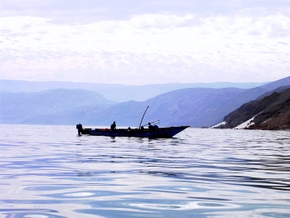 Somalia is no ordinary tourist destination. To understand its extraordinariness, you must have a look into pre-historic times – cave paintings and rock art found in places like the Laas Geel complex (dating back to 9000 B.C.) indicate that the region has been inhabited since the Paleolithic Age. As time elapsed, Somalia became an important presence in the ancient world – a stronghold of the Puntite-people. Archeological excavations of entirely ruined cities have established this period as the ‘golden epoch’ of Somalia when a very advanced civilization flourished here. Somalia continued to prosper following the arrival of Islam, in the medieval period and later even kept colonial forces at bay for long.

Over the last two decades, however, the picture has changed … ravaged by civil wars and a series of floods and droughts, today Somalia has become a land of chaos, crime and corruption (excepting the Somaliland region). The capital city of Mogadishu, especially, has turned into a virtual hell, with ethnic-infighting and criminal activities like armed robbery, piracy and cases of kidnapping happening every now and then. The state of terrorism existing in Somalia has forced the government to send out warnings, to dissuade tourists from visiting Somalia.

Being a lion-heart is good but in the prsent circumstances, it will be like putting your life in jeopardy. In case, you still yearn to explore Somalia’s beaches, deserts, mountains and tropical forests, coral reefs as well as the many scattered evidences of Somalia’s glorious past, the safest choice will be Somaliland.

As said, to Somaliland you must go, because Somaliland is a blissful heaven and the top draws in Somaliland are:

Somalia might be one of the most anarchic nations of the world, without an organized state or government, but Somalia’s economy is exhibiting some signs of progress. In the absence of adequate natural resources, Somalia’s economy is based on agriculture and livestock contributes about 40% to the GDP. (Livestock also brings in 65% of export earnings and it is followed by banana). Somalia has some small industries engaged in processing of various food products and agricultural products, textiles, handicrafts, etc. The nation’s service sector is making some progress. Somalia’s economy benefits hugely from remittances by diasporas Somalis.

Although a relatively poor country, the living standard of the Somalis is believed to be better when compared to other African nations. Somalia also boasts of a sound infrastructure, at least when we are talking about telecommunications. As far as transportation is concerned, the sector is suffering from lack of maintenance.

Somali Culture is a blend of the nomadic lifestyle of the people, their clan-based social structure and their Islamic faith. Almost all Somalis are Sunni Muslims and speak Somali. Somali art forms, being based on nomadic/tribal traditions, are mostly utilitarian in nature rather than decorative and there is huge demand for Somali basketry, pottery, wood-carvings and beaded jewelry. The nomadic influence is also observd in the clothing of the Somalis.

The national capital and the largest city of Somalia, Mogadishu, is situated on the coast of Benadir and has acted as a very important port for years. It was in early 1991, when the government of the country collapsed. Since then, the city has been busy fighting the rival militias, which has transformed the picture of the city to a lawless one....  Read more »

Mogadishu, Somalia is not really the best travel destination in the world, but that is due to the ongoing tension in that region.  Travelers are given the recommendation that they should find out about the current affairs in a country before they begin to plan a holiday there. The main attraction in the country is Kismayu National Park, which is not too far from Mogadishu....  Read more »