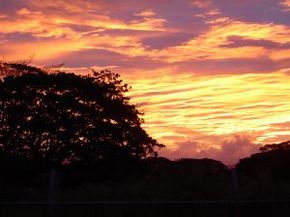 The Solomon Islands, a country in Melanesia, were first discovered by the Spanish navigator Alvaro de Mendana y Neyra. He named the islands after the legendary king Solomon because he believed he had discovered the place of provenance of Solomon’s riches.

The Archipelago is located in the West-Center of the Pacific Ocean, between Papua New Guinea in the West, Solomon’s Sea in the South-West and the Vanuatu Archipelago in the South-West. It comprises around 100 islands, out of which eight are volcanic islands and atolls. The largest volcanic islands are Guadalcanal, which has a surface of 6740 Km2 and San Cristobal of 4660 Km2. The maximum altitude is reached in Guadalcanal and it is of 2331 m.

The town is situated on Guadalcanal Island and it has been rebuilt in order to replace the former capital, Tulaghi, after World War II. Among the sites that are worth visiting tourists may count the National Parliament Building, opened in 1993. It is an impressive conical building, which can be visited, if previously arranged with the Sergeant at Arms. If visitors want to find out more about the country’s traditional currencies, archaeology, body adornment or weaponry, a visit to the National Museum is a “must”. Also, roaming about the fishing village recounts the people’s way of life.

LILISIANA is unique for its culture whose story begins on the artificial reef islands in Langa Langa Lagoon. One can bathe here in the sun on the golden beaches and can see the shell money which is being manufactured here.

90% of the territory is covered with dense tropical rainforests of hardwood. One can find along the coasts a multitude of coconut palms and extensive mangrove swamps. The sight of the marvelous lagoons and waterfalls gives the visitors all the peace and charm they need. The flora in the Solomon Islands resembles a lot that in Australia. It consists of over 61 species of small reptiles, 163 breeding species of birds and 53 species of mammals.

The climate is semi-tropical, the weather being mainly hot and humid. There are no great variations of temperature over the year. The wet season lasts between November and April. During these months, visitors should be prepared for hard storms. Sometimes earthquakes take place. The most devastating earthquake took place in 2007 and it was also followed by a tsunami.

As the weather is pretty hot and humid tourists should wear lightweights, cottons and rainwear during the wet season. The currency is the Solomon Islands Dollar (SBD). The official language is English, but it is spoken only by 2% of the population. The lingua franca is Melanesian pidgin. Among these two, there are other 120 languages and dialects which are spoken by the inhabitants. Visitors need a valid passport to enter the country. They only need a visa if they plan to stay for more than 3 months.

The country has two airports with paved runways and 31 airports that have unpaved runways. Henderson, the international airport is 11 km away from Honiara. Visitors may also arrive by sea if they have planned for a longer holiday, as this choice requires more time. It is easy to get around towns by bus or by cab. Foreigners ought to know that cabs don’t have meters so they have to negotiate first the price of the ride.

Visitors may choose the resorts depending on their needs. If they want to conduct business in Honiara they can put themselves up at the King Solomon Hotel. Here they benefit of large halls where they can hold their meetings and the professionally trained staff has as priority to make their guests feel at home.

If one is looking for adventure and rest, then Gizo Hotel would be the best option. Gizo is a mixture of charming beauty and endless tranquility. It is also an area famous for its reef dives and its immemorial wrecks.

Solomon Island cuisine comprises a great variety of dishes and cooking techniques. Fish is usually a staple and it is regularly served with sweet potatoes, taro roots and leaves, rice and various types of vegetables. Visitors can also enjoy here European and Asian delicacies. They bake a famous breadfruit called Ulu, which can be served with any dish. For dessert, guests may have a special mix of bananas and other exotic fruits, wrapped in pearl cassavas and served with caramel or whipped-cream.

Things about Solomon Islands you may be interested in

This Honiara Travel Guide will try to clarify all aspects concerning the capital of the Solomon Islands. Honiara has been capital only since 1952, when it was built and conceived to replace the former capital, Tulagi, at the end of WWII....  Read more »