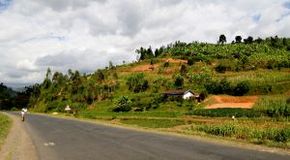 The country is a perfect destination to see wildlife in beautiful mountain scenery. The territory is also known as “ the realm of a thousand hills”, sheltering mountain gorillas, many kinds of monkeys, a huge number of birds, elephant and hippo herds, impala and oryx antelopes, lions, zebras and giraffes.

Trips are organized by Office Rwandais du Tourisme et Parcs Nationaux and also some private companies from Kigali, the capital city of the country. The offer of national reserves is rich: Akagera- near the river bearing the same name, Parc National de Volcans- craters are to be admired from airplane tours and The National Forest Park Nyungwe.

A great temptation for tourists is also represented by Kivu Lake, an opportunity to practice water sports or to stroll on its banks to enjoy the beaches, Kaboza and Nyenji caves and resorts like Gisenyi or Kibuye. To the East of the country, there is a region with plenty of lakes and waterfalls including renowned Mungesera and Rusumo.

The most important sights in the cities remind not only of the beauty of the country, but also of its violent history due to the Europeans (especially Belgians), the neighboring country of Congo or to internal fights between the Hutu and Tutsi populations, culminating with the killing of 800 000 civilians. Thus, the capital has a museum dedicated to this genocide of 1994; in Butare there is the National Museum displaying the entire history of the country and Gingkoro Genocide Memorial.

Still, it is mandatory to mention that this city also has a botanical garden and many shops offering handmade objects, splendid products of the African crafts. Gitarama is known for its art museum and Kabgayi for its cathedral. Mushubati is mostly visited for its surroundings, mainly the Bihongory grottos.

The two domains are very connected as the main branch of economy is represented by subsistence agriculture. People raise any type of domestic animals, from rabbits to cows, still they eat meat usually at feasts.

Water is sometimes a problem, even if the country has reach resources compared to other African nations. The beans, potatoes, plantain bananas and sorghum are the ingredients of daily food. However, there are crops of tea and coffee designated to trade and export. Tourism is also trying to catch up and become one of the most important sources of income. A stable, non-violent climate associated with the beauty of nature and crafts are composing the image the country is trying to present to foreigners.

Rwanda- Facts You Should Know

The care for ecology resulted in plastics bags being banned in the country and at its boundaries, thus transforming Rwanda in one of the cleanest states. Getting around is facilitated by the fact that along with Kinyarwanda and Shawili, French and English are official languages and most people are literate. The dangers one might encounter are diseases such as typhoid fever, malaria or hepatitis. If you think of going in the countryside, there are paved roads linking Kigali to the other main cities in the country or in the neighboring countries, but you will not find villages, only houses surrounded by the families’ land.

This Kigali travel guide will give you the basic facts concerning this large city that functions as the capital of Rwanda. It has a population of over 850.000 inhabitants and its central location in the country have made it Rwanda’s most important economical and administrative city since it was established as capital in the independence year 1962....  Read more »