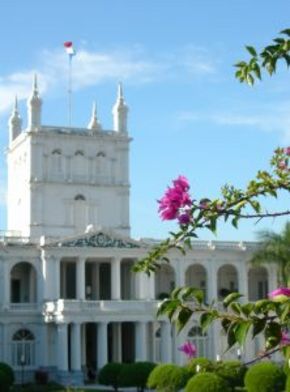 Paraguay is a lovely landlocked country in the centre of South America that offers grand views of picturesque landscapes, abounding in colorful plants and wildlife.

The goal of this Paraguay Travel Guide is to make the Paraguayan land a perfect entry point for those interested in finding the most popular destinations of natural, cultural and historical heritage around the world. This wonderful country gives many options as having the most diverse culture by mixing the traditional Spanish culture with the native Guarani one. Its varied relief and pleasant tropical climate, its folk art present in every Paraguayan town and village, the most picturesque landscapes of its rolling hills and shady valleys, make Paraguay have all the privileged conditions to enchant any of its visitors.

Oficially known as the Republic of Paraguay, this small country is located right in the heart of South America. Because of its location, Paraguay is often named Corazon de America. It lies on the banks of the Paraguay River which divides the country into two main geographical regions: the Paraneña Region to the east, which is dominated by low hills and mountains decreasing into large plains and lowlands, and the Chaco Region, which is a vast plain featuring low hills in the northwest. The Estero Patiño, which is a 1,500 square kilometers swamp, lies in the Bajo Chaco.

The country of Paraguay is crossed by the Tropic of Capricorn and experiences tropical and subtropical climates characterized by two distinct seasons. Summer, from December to March, features very hot and humid climate with heavy rain falls. The temperatures range from 25 to 38 degrees celsius, sometimes increasing to higher than 43 degrees in the west. Winter lasts from June to September having a mild climate with temperature ranging from 16 to 21 degrees and lower during the nights.

Ciudad de Asuncion is the capital city of Paraguay. It lies on the left bank of the Paraguay River, close to its confluence with the Pilcomayo River.

Asuncion is also known as the ”Mother of Cities” because of its longest continual habitation as being one of the oldest cities on the South American continent. Once you are walking down its narrow streets and admiring its beautiful old buildings, you can immediately recognize the traces of being the colonial capital of South America. Nevertheless, its modern attractions perfectly mixed with its historical buildings of main architectural gives a charmimg atmosphere of the city. Most hotels, restaurants, malls and offices follow a specific standard so as to offer a typical modernism of the city.

It is known that football is the most popular sport in Paraguay, and the capital city of Asuncion hosts some of the most important football clubs, such as Club Libertad, Club Nacional, Club Guaraní and Club Sol de América, each of them having their own stadiums and other sport facilities.

Paraguayan cuisine consists mostly of meats and fish, combined with a large diversity of seasonal vegetables and fresh fruits, consumed along with corn and manioc. Guarani traditional food has been largely influenced by colonialists’ cuisine. The most popular dishes are Chipa, which is a type of traditional bread, and Chipa Guasu, made of corn flour, Sopa Paraguaya, a popular soup consisting of mashed corn, cheese, milk and onions, Bori-Bori, a thick broth with balls made of corn and cheese, and soft drinks such as Mate and Caña, the latter being the alcohol version of sugar-cane juice, both quite popular in Paraguay.

Guarani is the national currency in Paraguay. 1 guarani is divided into 100 centimos. It is available in both coins and notes.

People coming from neighboring countries as well as the ones coming from Venezuela, Poland, Slovak Republic, Lithuania, Ireland, Malta, Cyprus, Japan, Latvia and the Holy See enjoy the exemption of visas to get into Paraguay. People from all other countries need a visa for admittance into Paraguay. The visas can be easily obtained at any of the Paraguayan consulates in the foreign countries.

To conclude, this Paraguay Travel Guide has described only a summary of the multitude of beauties and leisure activities waiting for any of you willing to visit Paraguay. This country has a great potential to offer the best comfort and assures the visitors of a safe tour while exploring the sights of its lovely cities and rustic villages, or simply wandering through its picturesque landscapes to discover the Paraguayan natural beauties.

A
A
Asuncion
guides

The young and cheerful city of Asuncion in Paraguay has many sights to offer – be it the vivid beauty of the crowds in restaurants, clubs, or on the street, or the fantastic natural landscapes surrounding the city and the breathtaking monuments which testify for its past – Asuncion has it all and it can’t wait for you to discover it....  Read more »

Asuncion, the present day capital of Paraguay, is known as the “Mother of cities” due to the fact that it is one of the oldest settlements that have been inhabited ever since their foundation in all South America....  Read more »

Asuncion is the capital of Paraguay and the largest city in the country, that doesn’t belong to any department and is autonomous as a city. It is the economical and cultural centre of the country and it has the unique global feature that its Municipality is listed on the Asuncion Stock Exchange. It has a population of 520....  Read more »