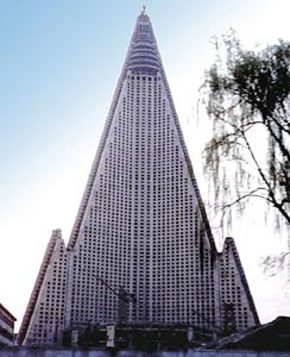 Look at the beautiful photographs of the Geumgangsan Diamond Mountains with their 12000 jagged pinnacles or at those of the very picturesque Mt. Baekdusan with the azure Cheonji Lake filling the crater of the dormant volcano, and you will be at once tempted to take a trip to North Korea. The tourist heaven visited by countless tourists every year has more for you – there is the lure of the nation’s imperial history and culture.

The much planned cities of North Korea and their modern attractions like The Juche Tower, The Palace of Culture and Ryugyong Hotel deserve to find a place in your itinerary. Before you go ahead with your plans of touring North Korea, however, you must have this clear idea that independent traveling is not allowed in Democratic People’s Republic of Korea (DPRK). Tours are conducted by government-recognized Tourism Organizations; with one or two tourist-guides to guide you at every step, you will yearn for a little freedom, but when you see the same guide(s) speaking to you in your mother-tongue, you will be relieved.

North Korea has a centrally planned economy with government-control over the various economic sectors. The industrial sector, comprising industrial ventures like armaments, chemicals, food-processing, machineries, tourism, etc., is the most vital sector and accounts for the highest share of GDP. The agricultural sector has shown improvements in the recent years but it still runs behind the services sector in terms of sector-wise contributions to the GDP.

North Korea has a sound communications and transportation infrastructure; of course, this is not the only beneficial aspect of the DPRK’s nationalized economy as it also pledges social security to the people in the form of food ration, free education and healthcare services, etc. The quality of life index is showing an upward mobility in spite of the existing limitations.

Things about North Korea you may be interested in

Pyongyang, North Korea does not have a nightlife, so to speak.  You are not allowed out after dark unless you are at a restaurant, and even then it is questionable.  The only places you will find to go are usually within your own hotel, if it happens to have one. North Korea is very strict on nightlife type activities, and this is simply a part of their culture....  Read more »

The capital city of Pyongyang is famous amongst tourists and it is also the first city visited by almost every tourist, as it is the capital of North Korea. All international flights land in the city of Pyongyang. To start with, one should visit the world deepest metro rail system which is part of Pyongyang itself....  Read more »

Pyongyang happens to be the capital city of North Korea and hence it becomes the most important city. To help the government, the city of Pyongyang has been divided into 4 counties and 19 wards. This makes the administration of the city a pretty easy task. ...  Read more »