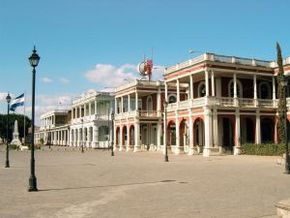 Nicaragua is the largest state in Central America, offering 910 kilometers of coast at the Pacific Ocean and at the Caribbean Sea. It’s true that not the entire distance can be used as a beach due to the existence of swamp territories, but there are some wonderful sandy spots, such as El Coco, Marsella, Ocotal. Volcanoes, although they may not sound as the friendliest destinations, are a source of richness for the country: there are many well organized reservations, allowing the possibility of volcano climbing; the hot gases help to the formation of thermal springs; the soil is very fertile producing a huge variety of plants.

Besides the rainforest (shelter for many animals), the luxurious offer of fruit, orchids are a delight to the sight. Sea life can be admired in places like Rio Escalante Chacocente where you can see turtles or by taking a boat trip to the Island of Corn. For those enjoying a city atmosphere, try the capital- Managua, but make sure not to miss colonial cities like Leon and Granada, which are the real stars.

Tourism has become during the last 12 years one of the main branches of economy. It is not surprising, as the country has gone over its violent past and turned into a stable, democratic state with a splendid nature, offering cheap, still decent places for accommodation (6-12 US dollars per night), fine meals at a price between 2 and 4 dollars. An entry at the museum is around two dollars, a bottle of water around 0.7 dollars.

Besides tourism, trade and exports of coffee, wood, sugar cane, tobacco, soy and many local plants are sources of income. Industry consists mainly of oil refining, metal processing and manufacturing of industrial equipment.

The great majority of inhabitants live near the great lakes of Nicaragua and Managua. It is a poor country judging by the number of persons attending school or by the gross domestic product, which does not mean it’s not welcoming. Many efforts (local or with external aid) have been made to improve the literacy level, the health and childcare system.

The official language is Spanish, many also speak English or the local dialect named Miskito. The main religion is Roman Catholic, influenced by many local traditions and folklore. The orally transmitted myths, the old music rhythms and costumes are present at every celebration, Christian or not.

Corn is a basic ingredient in many dishes, such as Nacatamal- a sort of pie with dough made of corn and butter, filled with meat, onion, rice; Indio Viejo- a kind of meat stew with garlic and pepper; drinks like Chica or Pinol; desserts named Atilillo or Pererreque. Famous Nicaraguan dishes are also gallo pinto (rice with beans), vigoron (a type of salad), quesillo (tortilla and cheese), sopa de mondongo (gut soup) or tres leche for something (very) sweet. Taste the local fruit and spices: jacote, mango, papaya, oregano, coriander or annatto.

The climate is tropical, including two seasons- dry and wet. Depending on the spot visited, the weather can be different. Central America does not have the same heights as South America, the 2400m peak Mogoton being the highest point. However, mountain climbing or visiting the tropical forest, especially wet and with no possibility of fire lighting, can make people extremely cold. Generally the months of December and January, although hot, are recommended for visiting.

Managua, the capital city of Nicaragua, is the perfect example of a modern Latin American city - full of life and activity. The city is certainly not the chief tourism destination in Nicaragua; however, its pivotal role as the commercial, cultural, economic and industrial center of the nation as well as its modern facilities makes it an idyllic leisure destination. ...  Read more »

Managua, Nicaragua is a city known for its exciting and varied nightlife.  The city is home to hundreds of clubs, fine restaurants, cinemas, and casinos.  One nice advantage to this city is the lower price of alcohol and theater tickets in comparison to American bars.  Dancing is Managua’s favorite pastime, with the most prevalent being salsa dancing....  Read more »

Managua has had a long and troubled history.  Despite its unstable political trouble, Managua also has evidence of a beautifully cultured life that has ceased to exist.  Over 6,000 years ago, the Paleo Indians roamed the land of Managua which has been scientifically verified by a set of foot prints engraved in ash and mud from the Crater Lake Managua in the volcanic region of Managua....  Read more »

Managua has a variety of beautiful places to visit.  It has been able to conserve a large part of its colonial history which is absolutely spectacular to see.  Managua in Nicaragua also has a variety of natural attractions and destinations which include beaches, national parks and volcanoes.  Here is a sample of what Managua has to offer to you: ...  Read more »