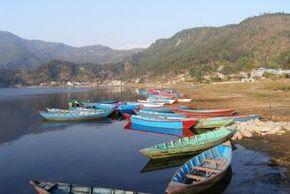 While thinking of Nepal, the first thoughts coming into mind lead to living Goddesses whose smiles are a real benediction, adventurous walks through legendary places where fierce ogres once used to live, hidden mysterious gardens behind fabulous palaces where the most unbelievable miracles happen, and the best decision to take is that Nepal must be the perfect destination for an unforgettable vacation. A country rich in picturesque landscapes varying from green plains, mid hills, deep valleys, clear blue lakes and the world’s highest peaks, Nepal is the perfect place for the adventure seekers who are well-prepared to face the challenge of their lifetime.

Nepal is a landlocked country which lies in South Asia, with a highly diverse relief. The southern lowland plains, named Tarai Region, with fertile soils, are the main lands to produce the grains for the population. Towards north, the Hill Region varies from 1,000 m to 4,000 m in altitude. The region is dominated by two low mountains ranges, the Mahabharat Lekh and Shiwalik Range and also includes the Kathmandu Valley, which is the most fertile and urbanized zone of the country. The north part of the country has the Mountain Region, in the Great Himalayan Range, with the world’s eight highest peaks, including Mount Everest, 8,850 m. However, the large number of tourists coming to Nepal is attracted by its marvelous mountains for mountaineering and trekking.

The climate varies according to the altitude. The Tarai region has a subtropical climate with temperatures that can reach 45 degrees Celsius during the summer. It is a hot and humid area. In the middle hills, there is a dry temperate climate with pleasant summers and mild winters. In the northern Himalayan Massif, alpine conditions persist all year round with low temperatures which easily drop under -30 degrees Celsius.

Kathmandu, the capital city of the Federal Democratic Republic of Nepal, attracts the visitors with its multitude of splendid temples and the large number of festivals held almost every day of the year. Lots of pagodas, stone shrines, fascinating old temples, the three Durbar squares, blend the Nepali cultural vigor with modern facilities which make the city one of the most amazing in Asia.

Other popular cities as Patan, Bhaktapur, Pokhara, Lumbini or Chitwan, enchant their visitors with the most spectacular sights and the most impressive views offered by the surroundings.

Nepali cities offer good accommodation facilities in their standard star hotels, small hostelries and lodges. Booking needs to be done well in advance especially during spring and fall as the best hotels work at full capacity because of the abundance of the visitors.

Rural tourism is also practicable in Nepal. In Nepali villages, accommodation is in guestrooms with host families. The guestrooms are quite simple, but very clean and comfortable. Sleeping in tents is done in wild areas.

Nepali food depends on the region. Dal, some kind of a lentil soup, Bhat, which is steamed rice, and Tarkari, curried vegetables, accompanied by pickles, are considered to be the traditional dishes in Nepal. Curried meat is also popular.

Nepal is known as having a large number of pilgrimage sites and some of them have been working since ancient times. There is a belief that glorifies the miraculous power of each deity in any of these temples. Hundreds of popular temples are situated in the Kathmandu Valley. Some well-known pilgrimages sites in Nepal are Pasuparinath, dedicated to Lord Shiva and the holiest Hindu temple, Swoyambhunath, aged 2,500 years old, Janaki Temple, Baraha Chhetra, Janakpur, Manokamana, Boudhanath, and many more spread all over the country.

Climbing and trekking are the most popular attractions in Nepal which gather thousands of adventure seekers every year.

Nepal offers 326 peaks open for mountaineering, including the world’s highest top, Mount Everest. Mountaineers need climbing permits for peaks in all the seasons and sometimes the accompaniment of a liaison officer for the expedition is required. Climbing equipment and gear is to be bought or rented in Kathmandu. Mountaineering and trekking agencies can handle each expedition by providing gear, food, transportation, guides and porter services.

Trekking is the second biggest attraction as it is a great opportunity to see the country and understand its people and their customs. Pony treks are also available in some remote places.

The official currency is the Nepalese Rupee (NPR). It can be legally converted in banks at the daily exchange rate or at black market rate in carpet shops and travel agents.

Nepal is no more than an opportunity to experience the most exciting adventure by walking through emerald rice fields and rhododendron forests, climbing up the highest mountain tops on earth, camping out on a hilltop far away from modern civilization, trekking the most adventurous paths or getting in touch with legendary myths in ancient temples.

Kathmandu nightlife happens in bars near Pulchowk, but is mostly focused on Thamel. Unfortunately, music cannot be played in public past 10 at night; but in Thamel, a lot of bars get away with staying open until way past midnight. You will find night hangouts here very similar to smaller towns like Varanasi and Aurangabad in India....  Read more »

Kathmandu, Nepal is known as the commercial, cultural and political center of the country and is thus the most visited spot for tourists, as well. While it used to be a kingdom, it now comes with three major cities, including Bhaktapur and Patna. Seven UNESCO cultural heritage sites can be found in the valley of Kathmandu. ...  Read more »

Kathmandu sits right in the middle of the Himalaya Mountains. Known as one of the most gorgeous cities worldwide, tourists flock to this destination to appreciate its beauty and rich history. Kathmandu happens to be not just the capital, but also the biggest metropolitan city in Nepal. Kathmandu history is quite an interesting array of events.  Read more »

Kathmandu is the capital of the Federal Democratic Republic of Nepal. One of the most beautiful cities in the world, Kathmandu is situated in the Kathmandu valley in the very heart of the Himalaya Mountains....  Read more »