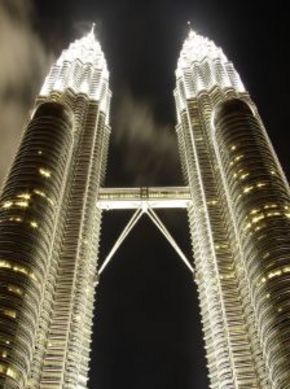 With over 27 million people of different ethnic backgrounds and cultures, you are bound admire the colorful festivals, colossal skyscrapers, serene beaches and breath-taking rainforests that this country has to offer.

· Kuala Lumpur: This capital city of Malaysia is also the largest city in the country. The city is well known for being home to an eclectic mix of ethnic groups, religions and cultures. Here, you will find graceful colonial buildings, stunning mosques and temples, well designed green spaces, vibrant streets and avenues, mammoth contemporary skyscrapers (also including the world famous Petronas Twin Towers), promising the itinerary in this city to be fulfilling. The city also boasts a very healthy nightlife.

· Batu: Famous for the Batu caves, this region is among the most popular destinations in Malaysia. Located around 15 Km from the capital, Batu has fascinating temples with remarkable architecture that attract thousands of tourists every year.

· Penang Islands: Often called 'Pearl of the Orient', this region is well known for its tropical beaches and fabulous cuisine. It is an ideal destination for water sports enthusiasts. It offers ample avenues for activities like jet skiing and parasailing along the beaches of Batu Ferringhi. The rail drive up Penang Hill amidst the green tropical forests offers a scenic view not to be missed.

· Sabah: Host to picture-perfect beaches and untouched wilderness, this destination is a must-see for any tourist. For the adventure seekers, a hike through the scenic Mesilau Trail to the summit at Layang Layang is definitely not to be missed. The Rafflesia (World’s largest flower) is an added attraction found in the rainforests of Sabah.

· Cameron Highlands: The Cameron Highlands is a quite, serene, romantic highland resort. A cool breeze blowing all the time, strolls around the country inns, the plantations, rose garden nurseries, the strawberry farms and the butterfly farms, impress tourists who seek refuge from the busy city life to attain peace and relaxation. Trekking, bird- watching and playing golf are a few of the other recreational activities that the Cameron Highlands have to offer.

Malaysia has one of the highest standards of living in South East Asia, largely because of its expanding industrial sector. Malaysia is recognized as a newly industrialized country since the major growth has taken place in the last thirty years. Malaysia has successfully reduced the economic inequality as well as poverty levels among the citizens.

Malaysia’s sound infrastructure is one of the most well developed infrastructures among the newly developed countries in Asia. It boasts a large network of well-maintained highways, efficient seaports that facilitate around 95% of Malaysia’s trade and well-developed air-cargo facilities. Malaysia's telecommunications network has seen expansion and upgrading during the past decade after the successful privatization of its Telecommunications Department.

Malaysia is a multi-cultural, multi-ethnic and multilingual society with a mix of Chinese, Malays and Indian population. Malaysia had a rich past and the cultural spectrum reflects in its music, dance and even in the architectural heritage of its cities.

Malaysia has a wide variety of native dances. One of the favorite native dances in Sabah and Sarawak region is the bamboo dance. Mak Yong is another style of traditional dance-drama, which was performed in the courts of the Sultans earlier.

Malaysia also boasts a huge nightlife culture with clubbing and shopping that go late into the wee hours of the night.

Tawau is no Kuala Lumpur or Kuching but it is no more the tiny fishing town it used to be in its initial stages (although it continues to be famous for its crabs, prawns and fishes)....  Read more »

The town of Sibu, situated in Sarawak, East Malaysia, is the capital of Sibu District, 130 km from the South China Sea, at the confluence of the Igan and Rajan Rivers. It is also the most prosperous town in the Rajang valley. This town is a rapidly growing commercial center and main port for the Rajang Basin. The town derives its name from the local Sibau fruit....  Read more »

The word Johor is derived from the word Jauhar which is actually a gem or a precious stone. Initially this same area was earlier called as Ujung Tanah which actually means end of land. It was called so as this land is located on the south most point of the Asian Continent. It was the early years of the 16th century when the modern history of Johor actually started to take shape....  Read more »

The state of Johor will furnish every possible means of living your day time to the fullest and once the sun sets you will understand that real life in this state starts once the moon rises. To enjoy nightlife in the state of Johor the best place to hit is the capital city namely Johor Bahru....  Read more »