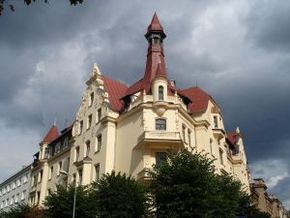 Lithuania, a miniature jewel of Northern Europe, is surrounded by Latvia to the North, Belarus to the South-East, Russia to the South-West and it has the Baltic Coast in the West. The relief is that of lowland and the country is covered by forests and watered by scattered lakes. The plains are separated by hilly uplands that used to be glacial deposits. The highest point is Juozapine Hill 293.84, about 30 km S-E of Vilnius.

Vilnius is an important cultural center, hosting numerous museums and over 20 art galleries. The streets are studded with shops, restaurants, pubs, night clubs and hotels. The capital is a medieval town of baroque and gothic architecture and its historical city center is the largest in the entire Europe. There are over 1500 constructions built in different styles, in the old city center. A part of them have been renewed due to the fact that Vilnius is together with Linz the European Capital of Culture in 2009.

Saint Anna’s Church rises on the right lakeshore of Vilnia, in the historic side of the city. It is a Roman-Catholic church, made of bricks, a mixture of three styles as the steeple, dating since 1870, is neo-gothic, the red façade is gothic and the interior and the altar are overwhelmed with baroque adornments.

The Gediminas Castle. It is said that this castle was built as a consequence of a dream that Duke Gediminas had. Initially, it was made of wood, but it was consolidated with brick, more than once. Some pieces of wood have been discovered and they are studied in order to rebuild the castle in conformity with the historic past.

The Trakai Castle is 27 km away from Vilnius and it was built in the 15th century. It is also known as the island castle as it is surrounded by water. People can get there by bus or by boat

The Vilnius Cathedral was built in 1251 right after king Mindaugas converted to Christianity. It is considered to be “the spiritual heart of Lithuania. The cathedral shelters Saint Casmir’s baroque chapel built in the 18th century, famous for its goblet shaped pulpit.

The Hill of Three Crosses is an important place of pilgrimage for the Christians of the Baltic countries. It is accustomed that each visitor should leave here a symbol of Christianity. It is estimated that more than 50000 objects of worship have been gathered.

The Royal Palace, whose columns are like those of Ancient Greek, was built in Empire style. Nowadays it is the president’s residence.

The Lithuanians consider Kaunas to be the most representative town for their country. The most beautiful part of the city is the historical center, the area around the town hall, which lies between two rivers: Neris and Nemunas. Most of the Lithuanian universities are also to be found here. Kaunas, also known as the City of Museums, shelters a Jewish community, the old ghetto being located right near the town, as well as Museum Fort Nine, the place where the Jews were wating to be killed by the Nazis. Lasives Aleja is the most famous street in Kaunas and it stretches between the old town and the Church of Saint Michael. It is studded with banks, supermarkets, a cinema, a casino, night clubs and museums.

Lithuania has a continental/maritime climate. Summers are not very hot as the mercury doesn’t go beyond 30˚C, but winters are colder as temperature may go below 0˚C. Many lakes freeze over, so fishing becomes an important leisure activity. Rainfalls are more likely to be felt during mid-summer.

The Lithuanian currency is the Lita. Visitors are advised to avoid showing or spending large sums of money. As Lithuania used to be part of Russia many tourists mistake Lithuania for Latvia and as a consequence they think Riga is the capital of the former. It would be a sign of respect for the tourists to remember that actually, Vilnius is the capital of Lithuania. Natives usually get angry whenever this kind of misunderstanding occurs. If one wants to call to Lithuania from abroad, first he has to dial the Lithuania country code, 370, then the number. Their national sport is basketball and they are all mad about it. Their team’s latest and greatest achievement was a bronze medal in the Europe Championship.

The Baltic States, especially their capitals, Vilnius, Tallinn and Riga are famous holiday destinations nowadays. Vilnius, the picturesque capital of Lithuania, is a multinational and multicultural city with a rich history, interesting traditions and a lively nightlife. Vilnius is so diverse that any tourist is sure to find what they are looking for....  Read more »

Vilnius, the capital of Lithuania, is a multinational and multicultural capital with a rich history that had a great role in shaping the city into what it is now. Although at the first sight the Baltic countries might seem rather remote, there are good links to many of the major Baltic cities, including, Riga and Minsk....  Read more »

The three Baltic capitals, Vilnius, Riga and Tallinn attract an ever increasing number of tourists each year. No surprise, since Vilnius is one of the most elegant cities in Europe, and in 2009 it is also one of the continent’s cultural capitals....  Read more »

Palanga Nightlife is not only about the huge number of bars and pubs that are located in this happening city. Although traditional night lovers will have plenty of options in form of nightclubs and bars which they can attend to enjoy their nightlife, but this doesn’t mean that those who are looking for a different kind of experience will have nothing to enjoy in this city once the sun sets.  Read more »

This awesome natural tourist hot spot is located on the south western side of Amber Museum and is considered to be an important tourist hot spot for those who are looking for some peaceful place. During historical years, this hill was an observatory for celestial bodies and the location of pagan sanctuary for various settlements. ...  Read more »