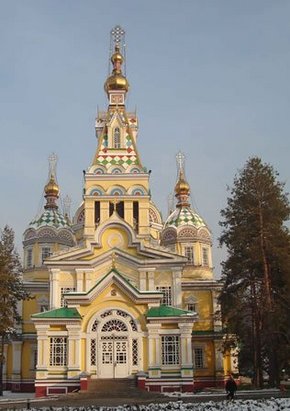 A former state of the Soviet bloc, Kazakhstan is definitely not your usual tourist destination. The lack of notable historical and cultural sights might make some potential visitors overlook Kazakhstan, but while the entertainment that you can find there is rather unconventional, there certainly are a few things that are guaranteed to draw your interest. The arid steppes and mellow dry hills of Kazakhstan will appeal for those who are in need for some time off from the ‘civilized’ world, or simply for dreamers who appreciate the beauty of vast empty expanses. Kazakhstan is a giant state, the ninth largest in the world, and its flatlands have been a favorable setting for the nomadic hordes who are the ancestors of a large part of the country’s population. Kazakh culture is an interesting mix of Turkish, Mongol and Russian elements, and those open to new things will find a holiday in Kazakhstan a rewarding experience. This Kazakhstan Travel Guide will briefly describe the country’s geography and culture, so that you know what to expect.

At the first sight, Kazakhstan seems like a barren land. More than a quarter of the country is occupied by steppes, another quarter by mountains and the rest by deserts and half-deserts. It does not look like a welcoming environment, but the nomadic tribes who lived there until not long ago have found ways to survive on the little that the land had to offer. Don’t expect to find only desert and grasslands; there are forests in Kazakhstan, as well as quite a lot of cultivated land. The Kazakh capital, Astana, is located in the central region of the country, on the banks of the Ishim River, in the middle of a flat steppe. The city is very new and quite modern, but mostly devoid of historical sites. You can visit most of the major cities in Kazakhstan by plane, but if you want to get a real taste of the local culture, you should probably mingle with the crowds and use public transport. Winters are not very cold in Kazakhstan, but bring warm clothes nonetheless. Summers are mild and pleasant, without the risk of dog-days.

While Kazakh is one of the official languages of the country, along with Russian, the Kazakh people are becoming a minority in their own country. There is a wealth of minorities living in Kazakhstan: Turks, Russians, Tatars, and Uzbeks. However, all these different people share some common values such as hospitality and respect of strangers. Customs and traditional beliefs are an important part of modern Kazakh culture. The best way to describe the attitude and pattern of thought of the Kazakh people is ‘the way of the elders’, an expression that accurately describes the workings of society. When visiting Kazakhstan, be sure to taste some of the traditional dishes, although they may seem strange to the western palate. Dairy, horse meat and mutton are staple foods. Some dishes retain a certain symbolic value, especially when served to strangers. For example, if invited to a traditional household, you might be asked to bless the meat and ask the spirits for permission to eat it. This Kazakhstan Travel Guide recommends that you try out the manti, dumplings filled with delicious meat based fillings.

Astana, located in the northwest of Kazakhstan, is the capital of the country, and its second largest city. Astana became the capital in 1998, instead of Almaty, which still remains the cultural, economic and financial centre of Kazakhstan. Most embassies had moved to Astana more than ten years ago, and the city became the country’s political centre....  Read more »

The city of Alma - Ata (now famous by the name of Almaty) is amongst the most populated cities in the country of Kazakhstan. As per the latest census of year September 2008 the population for the city of Alma - Ata was around 1350000 inhabitants. This is actually 8 percent of the total population that lives in the country if Kazakhstan. ...  Read more »

The history of Alma-ata or Almaty started in 10-9 BCE during the Bronze Age and this was the time when the farmers and the cattle-breeders settled in the area. The area next great evolution happened during the Middle Ages and the area was known for its cultural development....  Read more »

For those who want to experience city-living that fuses nature and modernity, then the city of Alma-ata or the Verny is one city that should be checked out. The city offers a beautiful setting in between the mountains and the plains....  Read more »

The city of Alama-ata is a popular tourist destination for many reasons. One important reason why visitors check out the city is because Alama-ata is considered as the cultural center of the country....  Read more »