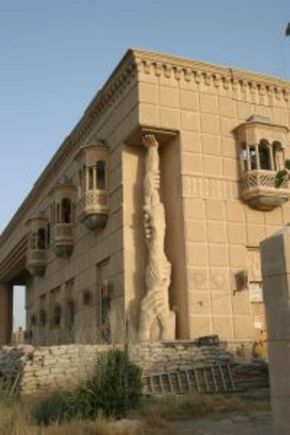 Iraq is a place of great natural beauty; but it is Iraq’s rich history that makes it a perfect tourism destination. Iraq has been the birthplace of civilizations; the earliest-known civilization of the world, Sumerian civilization, had flourished in the fertile valleys of the Tigris and Euphrates Rivers around 6 millennium B.C. Thereafter, the region saw successive and continuous civilizations.

Iraq has been the land where agriculture was first practiced, where writing was invented, first legal code of Hammurabi was developed, first wheel, sailboat, etc, were developed and used, where medical sciences evolved and people were introduced to the concept of zero. Iraq’s eminence continued even in the days of the Islamic Caliphates and later period (so much so that Baghdad was hailed as one of the greatest capitals of Islam).

Iraq tourism hit the lowest as a consequence of the infamy of Saddam Hussein’s regime, which was marked by political oppression and wars with neighboring countries and international superpowers. Iraq continues to be unstable, politically and otherwise, but then the lure to feel the pulse and verve of Iraq’s glorious past is simply irresistible. Add to this, the mouth-watering taste of Iraq’s kebabs and tikkas and you will keep going back to Iraq.

Baghdad: Founded during the rule of the Abbasid dynasty, Baghdad is famous for its blue/golden domed mosques and mausoleums. The capital and largest city is as much a historic city as it is modern and its attractions include old structures like the Abbasid Palace and Al-Mustansiriyah School as well as modern monuments like the Baghdad Tower and Al Shaheed Monument. Children will like visiting the Baghdad Zoo and the National Museum of Iraq as well as the Wax Museum. Baghdad’s souqs and bazaars are full of fantastic things you would like to carry back home.

Mosul: Mosul, the second largest city of Iraq, is an ancient city continuously inhabited since the days of the Assyrians long before the advent of Islam. Famous for its marbles and the Muslin-fabric, Mosul’s chief attractions include its many religious sites – churches and monasteries, mosques and shrines. Mosul’s souqs are an interesting sight with their motley crowds.

Arbil: Arbil, the third largest city of Iraq, is yet another historically and culturally important city. An early seat of early Christianity, Arbil’s tourist sites include the likes of Arbil Citadel (built atop ancient archeological ruins) and the Mudhafaria Minaret. The roofed Qaysari Bazaar, with its product-segments, is nothing less than a modern departmental store.

Iraq’s wars not only earned it infamy, it even landed the nation in utter penury, devastating its economy and infrastructure. Following the fall of Saddam Hussein, things started looking up with the removal of economic sanctions and help coming from the international community in re-building the nation, economically and infrastructure-wise.

Iraq, like its Middle East neighbors, is an oil-based economy. Iraq’s industrial sector, dominated by manufacturing units that have to do with oil-production, refining, etc., makes the highest contribution to the nation’s GDP. The industrial sector is followed by the services sector in its contribution to Iraq’s GDP; agriculture plays a nominal role in the economy.

Ranked third in the list of oil-rich countries, Iraq’s chief export commodity is crude oil. Despite the fact that many of Iraq’s oil-fields have not yet been drilled/bored, petroleum-exports is believed to earn the maximum in terms of foreign currency earnings. Other export commodities include dates and other fruits, hides, etc.

Identified as the ancient Mesopotamia, Iraq has a rich cultural heritage complimenting its continuous history. Iraqi-culture carefully preserves its Pre-Islamic traditions side-by-side its Islamic customs and other influences. One of the venerated cultures, Iraq has its typical arts, crafts, cuisine, literature and music.

B
B
Baghdad
guides

Baghdad happens to be the capital of today’s war struck Iraq. Baghdad is famous for its rich history and it used to be one of the most famous tourist spots of the Middle East but recently Iraq fell under the clutches of war against the United States of America not once but many times and since then tourism business has fallen considerably in the city of Baghdad. ...  Read more »

The capital of Iraq is the historical city of Baghdad. It is also estimated to be the largest city of Iraq considering its municipal population of around 7000000 inhabitants. Baghdad is also the second largest city when the whole Middle East is considered....  Read more »

With the current conflict in Baghdad, Iraq, it can be hard to find things to do and see. Baghdad is considered to be dangerous and unsafe.  The main thing you need to consider is security and transportation when exploring Baghdad.  Most foreigners hire a personal security guard of a team of guards for protection....  Read more »

Iraq hasn't been getting good press lately, less so for its capital Baghdad. The result of the deployment in the city by United States and United Nation military forces and the resulting resistance can only mean a city that's always on its toes....  Read more »