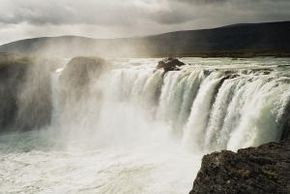 There are some elements that define this country: a small population, but very united, like in a big family living on an island, the volcanic scenery, including geysers, lakes and hot springs. Imagine going to a country where everyone is linked as relatives, friends, school or work mates. Some jokes refer to the fact that you can’t criticize anyone or have an adventure as everyone would immediately hear about your behavior. The inhabitants are of a great interest to those studying the evolution of genetics. They are the most directly linked to the legendary Vikings due to the isolation and lack of external marriages.

Iceland is a very well conserved country. Still issues regarding excessive fishing, the recent building of an artificial lake (57 square kilometers) for aluminum industry meaning the moving of nesting places for birds and grazing places for reindeer, generally the need to develop economically versus the traditional way of living are always debated. There is the need of keeping the territory as untouched as possible, but one must understand that, although the country is now rich regarding the income per inhabitant, after World War II especially, it knew what famine, poverty and disease mean. Worth mentioning is the fact that it has a large quantity of geothermal energy that is used to heat most buildings. It is a clean and renewable energy.

The capital of the country is Reykjavík, also the main economic spot. Almost all the 310.000 inhabitants of the island live in or around the city. It has many café-s, with a diffuse light, live music (one of the symbols of the country’s music is Bjork), good alcoholic drinks.

The inhabitants are friendly and speak, besides the local dialect, English and Danish. The city has something reminding of the romance and hardships of life in an old harbor. Reykjavík has the best job opportunities in the country, as a large part of industry is carried on here or around this area. This means fishing (especially herring), fish processing factories, and large refrigerating sites. Besides this main activity, manufacturing of ships, concrete, tins, whale oil, textiles, electric appliances, fertilizers and other food products is done in the factories of Iceland.

The country is about 500 meters above the sea level. It has many fiords and steep cliffs, but also beaches, some with black sand due to its volcanic origin (like Dyrholaey for instance). The climate is influenced by Northern Arctic Currents, but to the south it benefits of the Gulf Stream, bringing a milder influence to the country. It is a nice place to spend the summer. Even agriculture can be done, it’s true that the main crops consist of cereals, potatoes and hay for the cows and sheep. Many zones consist of swamps and surfaces covered with moss and lichens. The government has started a program for conifer tree planting. The country used to have birch tree forests, but unfortunately a small part of them still stands as they were heavily exploited.

The city of Akureyri is located north of the Republic of Iceland. It is the second biggest metropolitan area in the country after Reykjavik. This fourth biggest municipality in Iceland has its own shares of highs and lows. It is therefore worth noting some facts through Akureyri History.  Read more »

A relatively young city, Akureyri has tourist attractions that are definitely animated. Just like every other city in the world, its culture and lifestyle are carved on every side. The art and architecture fused with the city’s surroundings provide an ideal place for a tourist destination. When in Iceland, take some time to visit the beautiful Akureyri Sights.  Read more »

Reykjavik might not be the perfect spot for a beach holiday, but there are plenty of interesting things about Iceland’s mysterious capital that would make your stay worthwhile. Reykjavik is the northernmost capital in the world, and also among the greenest cities on the planet....  Read more »

Reykjavik is the capital of Iceland, and one of the most modern and greenest capitals of the world. Because it is situated so close to the Polar Circle, Reykjavik has the longest night in winter, while during summer it hardly gets dark....  Read more »