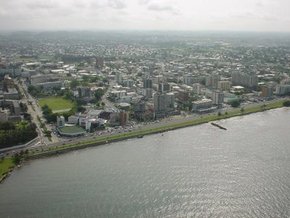 Travel Guides > Africa > Gabon Travel Guide
Gabon is a country covered by wanton tropical vegetation and where human establishments are placed along the rivers. Gabon is the Eden of ecotourism due to its multitude of parks and protected territories.

Gabon is a state located in the west of Central Africa and it is bordered by the Atlantic Ocean, Cameroon, Congo and Equatorial Guinea. About 85% of the country’s territory is covered by rainforests. The highest point is of 1575 m and it is in the Cristal Mountains. The coastal plains stretch on distances from 20 to 300 km. The karst areas are studded with caves. Many of these caves are still unexplored.

Libreville, the capital lies on the ocean shore. The National Museum is one of its main attractions as visitors can see the most beautiful wood carvings in Africa. Another interesting site is St. Michael’s Cathedral which is famous due to its 31 wooden columns. Each column describes a biblical scene.

M-Bigou and Eteke villages are well-known for their local crafts and golden mines. If you want to do away with your worries and clear your mind, then you should visit the Lope-Okanda Reservation, next to La Lope, which is a mixture of savanna and dense forest, consisting of 350 species of birds and many species of mammals.

Gabon has a moist tropical climate being the hottest region of all territories that have this kind of climate. The hottest time of the year is in January and most of the year rains fall heavily. Only between June and September rains are rare. The average temperature is of 31˚C.

As the territory is covered by equatorial forests, the fauna consists of more varieties of palm trees, among which can be found the gaboon tree, mahogany tree and rubber plants. Regarding the fauna, trees are inhabited by parrots, squirrels, baboons, toucans and makis. If tourists want to see hippos, antelopes and elephants all they have to do is take a walk on the banks of the rivers.

When visiting Gabon, tourists need a valid passport, an international certificate of vaccination against yellow fever. When entering the country, each tourist must present a round trip ticket or a document that shows the intention to leave the country at the end of the trip. The official language is French and the currency is the XAF franc.

Most hotels are expensive in Gabon that is why many tourists prefer camping.

Le Meridien Re-Ndama is located in the core of Libreville, on the shore of Lake Komo and it is the right choice for tourists who want to mingle business with pleasure as it has rooms specially arranged for meetings and it offers a wide range of leisure activities. Gourmets may enjoy the specialties of traditional cuisine. L

aico Okoume Palace Libreville Hotel is a seaside hotel close to the city centre which offers many possibilities: swimming pool and fitness centre for those who want to stay in shape even when they are on vacation, meeting facilities for business men, baby-sitting for families etc.

One can get to Gabon by air, as this state has around 200 airstrips a local airports among which we count Port Gentile and Franceville. Tourists may get around by ferry or by riverboats. Gabon has only one railway, called Trans-Gabon Railway, which stretches on 410 km. Tourists have the possibility to hire cars if they want to have a program that doesn’t depend on fixed schedules of trains, planes or ferries.

The main product of Gabon is the manioc root. Many traditional dishes consist of monkey and gazelle meat out of which they generally prepare many kinds of stews. Their bread is called Injera which looks like a pancake. Many dishes contain berbere and red pepper. Gabonese cuisine is famous for its various spices.

This Libreville travel guide will provide all the essential information concerning the capital of the sub-Saharan state of Gabon. Gabon is located in the eastern part of the Gulf of Guinea and is some 370 kilometers away from Malabo in Equatorial Guinea and Douala in Cameroon....  Read more »