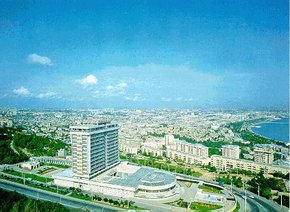 The purpose of this Azerbaijan Travel Guide is no other but to lead you into a miraculous world of an ancient place known as the country of Azerbaijan, the land of fire worshippers. Azerbaijan is known as being the birthplace of the humankind.

This country, located neither in Europe nor in Asia, is a mystical place of contrast and contradictions, which has largely contributed to the current culture and civilization since the earliest time of the humankind.

A land of indescribable beauties and harmonious combinations of ancient traditions and mythical ceremonies of different cultures, Azerbaijan offers the most impressive monuments and natural wonders, which are worth to visit at least once in a lifetime.

Azerbaijan is mostly known for its eternal fires, so called the atashgehs. The fire was considered as being the God and the ancients worshipped the fire. It is also known that people came to Azerbaijan from distant places in search of fire and they found it here. As a result, the most impressive temples were built in Surakhani and Ateshgah so as to worship the Fire God. The scientific explanation for the eternal fires is that they are on the site of natural gas leaks which ignite upon contact with air.

The main wealth of Azerbaijan is oil. Along the centuries, oil has been carried all over the region and much further. It has been also used in medicine as well. Nowadays oil and gas are still the main resources of the country.

Azerbaijan, officially known as the Republic of Azerbaijan, is a beautiful country located in the Caucasus region at the confluence between Europe and Asia. Bordered by Russia in the north, the Caspian Sea in the east, Iran in the south, Armenia and Georgia in the west and northwest, the Republic of Azerbaijan also includes the Nakhichevan in the southwest, a region which has declared its independence from Azerbaijan, but haven’t been recognized by any of the nations and it is still considered as belonging to Azerbaijani territory in spite of the Armenian strip which separates it from the Azerbaijan.

The Azerbaijani relief is dominated by the Caucasus Mountains in the north, the Talysh Mountains in the southeast, the extensive plateau in the centre and the Caspian shoreline in the east. The highest peak is Mount Bazar-dyuzi, 4,740 m, as part of the Greater Caucasus.

Baku is the capital city and the largest Caspian port of Azerbaijan as well as one of the oldest cities in the East since ancient times. It lies on the southern shore of the Absheron Peninsula and impresses its visitors with a large number of historical sites, which still preserve the antique atmosphere between their walls.

In spite of the fact that the historical documents prove the city is two millenniums old, Baku has a vibrant modern life animated by its multitude of theatres, cinemas, restaurants, discos and nightclubs so that any of its visitors can find the most wishful entertainment.

Baku is one of the many cities worldwide which is worth visiting at least once in a lifetime.

Typical Azeri cuisine is such a rich and delicious cuisine that tourists are definitely tempted to try. It is well-known for its abundance of fresh season vegetables and greens accompanying various kinds of meat.

Piti is considered to be the national soup, which is made of mutton chops on the bone boiled with plenty of diversified vegetables in a broth.

Dolma is also a traditional dish which consists of minced lamb mixed with rice, spiced with mint, fennel and cinnamon, and then rolled in vine leaves or sore cabbage leaves.

One of the most popular Azeri dishes is plov, made of rice, mutton, onion and prunes and flavored with local spices. Pakhlava and halva are also some popular desserts which consist of pastry well saturated in various flavored syrups which make them sticky but the most delicious ever. Let’s not forget about the Azerbaijani sherbet, a cold drink made out of fruit juice sweetened with sugar and perfumed with rose water.

The official currency in Azerbaijan is the manat, AZN. 1 manat is subdivided into 100 qapik. It is available in both coins and notes. Current AZN exchange rates are to be found on media, internet or banks as well.

To travel to Azerbaijan, most foreigners need a visa except those from Bulgaria, Romania, Hungary, Vietnam and CIS countries.

B
B
Baku
guides

Baku, Azerbaijan is one of the most popular tourist sites of Asia as it includes spectacular structures such as the Maiden's Tower. Madein's tower is located in old city of Baku and is considered as a premium attraction of this place because along with three fire signs it symbolizes Baku town....  Read more »