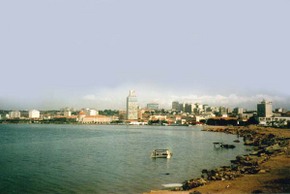 Planning an exotic vacation and you haven’t decided upon the perfect destination yet? Angola will suit all your needs for such an adventurous holiday destination. This marvelous country, located on the western African coast, between the Equator and the Tropic of Cancer, offers great opportunity to have a vibrant trip through superb landscapes which include the most sparkling rivers and waterfalls, the deepest jungles and the most thriving tribal culture, all together making a unique heritage of Africa.

The relief in Angola varies from terraced coastal plains to abrupt hills and mountains rising inland, and the large area of high plateau extending eastward. The chain of hills and mountains are quite parallel the coastline and rise abruptly, forming a high escarpment, which offers a great scenery from the distance. The highest point is Morro de Moco, 2,620 m. The high plateau dominates in size. It is a vast, flat and rolling surface, extending to the east of the mountain.

Because of its location between the Tropic of Cancer and the Equator, Angola experiences a tropical climate characterized by two alternating dry and rainy seasons. As a result, the climate is semiarid along the coastline and in the south, and the north is dominated by the cool, dry season from May to October, and by the hot season with abundant rain falls, for the rest of the year. The average annual temperature is about 26 degrees Celsius and it drops on locations further from the equator and with altitude. Sometimes, frost may be present at the highest altitudes in the middle of the dry season.

Angola offers a great opportunity to explore its wildlife in some of the most unique and picturesque national parks, which include gorgeous landscapes with rivers and waterfalls, dense jungles and rocky mountains, sharply rising up to the clear blue sky.

Cameia National Park attracts its visitors with the multitude of unfrequented lowlands, consisting mostly of greenish plains which are flooded during the rainy season. Located in the Moxico Province, much of the park is part of the Zambezi River basin. Vast miombo woodlands make the area a sample of nature. Lago Cameia and Lago Dilolo abound in grassy swamps, quite rich in aquatic birds.

Iona National Park, the largest in the country, is situated in Namibe Province. It is considered to be an animal paradise, the best hunting destination, extremely rich in big game. The park makes itself known by its diversified flora and the most astonishing rock figures.

Mupa National Park is the home of white giraffes, lions, leopards, wild dogs and spotted hyenas. It lies in the southwestern province of Cunene and represents the specific habitat of avifauna.

Cangandala National Park, situated in Malanje Province, between the Cuije River and the Cuanza River, amazes the visitors with its unique flora and fauna, as well as its splendid landscapes.

Luanda, the capital city of Angola, lies on the western coast of the Atlantic Ocean. Founded by the Portuguese colonists in 1575, the city is now an important seaport and administrative centre as well as a vibrant destination. Plenty of water sports in Luanda and nearby, the breathtaking land covered with coconut palms, the city’s bungalows and bars, as well as the historic reminders of the colonial presence, all together, make the city a tumultuous place.

Having been a Portuguese colony for over five hundred years, Angolan cuisine has been largely influenced by that. Most of the Angolan dishes consist of cassava products, seafood and spicy stews, also featuring peas, beans, yams, cereals, sweet potatoes, and steamed green vegetables. However, the cuisine in Angola is extremely varied, but quite tasteful, according to each area the ethnic group belongs to. For instance, the villagers in Central Angola prepare their meal with milk, curds and whey, while in the villages near the coast, crabs, mussels, lobsters and any other sea food are the main ingredients for a healthy meal.

Angola can be easily reached by sea, by air and by land. Passenger ships land in main seaports along the coastline. A large number of airports, both with paved and unpaved runways, handle numerous flights. TAAG Angola Airlines, based in Luanda, with a wide domestic network, handle flights to and from other African countries and South America. Transport by road and by rail faces a great deal of difficulties because of the Civil War and now, large sections of road and railway are being reconstructed.

The official currency of Angola is kwanza, available in both banknotes and coins.

Angola travel guide points out that to enter the country, a visa is required. Both Traveler visa and business visas are easy to apply for. All you need to have is a six month validity passport which must contain at least one blank page for the visa to be issued.

The city of Luanda is one of those cities on this planet which have been hit by war since recent years. Although last many years haven’t resulted into actual wars for the city of Luanda but the turmoil caused by old wars are still visible in the city. Major reconstruction work has been started in the city of Luanda almost after 40 years of ignorance by the government....  Read more »

Loanda (now famous by the official name of Luanda) is the capital city for Angola. With a booming population of around 5 million inhabitants, the city of Luanda is also the largest city for the country of Angola. Facing the beautiful Atlantic Ocean this port city of Luanda is famous for its economical importance which helps the growing economy of Angola. ...  Read more »